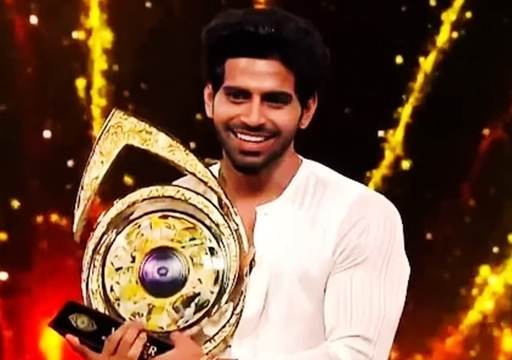 Balaji Murugadoss won the title of “Bigg Boss ultimate” which was launched by Kamal Haasan and partly hosted by Silambarasan. Former Bigg Boss winner Aari, actress Vani Bhojan and many others wished Balaji for winning the title but what grabbed the attention of the online users is the tweet uploaded by Niroop Nandakumar. The latter used the word “claim” in his tweet instead of win and Bala corrected him through his reply.

“BB ultimate winner aha “porupu” etra tharunam 💯 “Kaiyil kedachathu tholanjaa
Innum romba pudichathu kedaikkum “❤️ Playing and winning against 15 experienced players Was a Privilege. And it is only for my fam ❤️ edho enala mudinja repay for all your love. #BalajiMurugadoss” Balaji said through his post after winning the title.

Balaji was presented with a prize money of Rs. 20 lakh for his victory with a trophy. Former Bigg Boss winners Raju Jeyamohan, Riythvika and others graced the event with sizzling performances from former contestants Yashika and Samyuktha.

Balaji who was known for his anger, aggression and impulsive behaviour in Bigg Boss season 4, evolved with time and controlled his anger in the ultimate version and won the hearts of many fans only to receive enough votes to win the season.

Niroop Nandakumar became the runner up with most number of votes after Balaji and Ramya Pandiyan announced as second runner up. “First Title Winner of BB ULTIMATE தம்பி பாலாவுக்கு @OfficialBalaji வாழ்த்துகள் ❤️”💐” said former Bigg Boss winner Aari in his tweet to which Balaji replied back saying that he is also one of the reasons for his victory.

“Congratulations @OfficialBalaji on claiming the BBU trophy” Niroop said in his tweet replying to which Balaji corrected him saying “winning”.

These tweet exchange from the duo caused a lot of reactions from the followers of Bigg Boss show. Check out some of them below :

Clwimining… what do you mean by claiming?? You and @iamramyapandian claimed 2nd and 3rd position… though everyone knows you were not selected by people for this position

He didn’t claimed…He won hearts of many ppl and they made him to lift the trophy…He made his negatives into positives..He gave 200% in his game..Took every single task seriously.He played for US ❤ THE MOST DESERVED WINNER ❤🏆MANY CONGRATULATIONS FOR U👏#BalajiMurugadoss𓃵

Vaitherichal theriyudu with the word “claiming” .. adu sari, Wat can we expect from a person who is same like Anitha .. God bless you ..

Is there any doubt, Niroop, that he did not win the title?

Your choice of words 🤦🏽‍♀️#BBUltimate

He is giving perspectives for people to think🤦‍♂️🤦‍♂️

Previous articleWATCH : Yogi Babu Responded To The Comparison Between Beast & Gurkha!!
Next articlePooja Hegde Replied To The Questions Of Fans Ahead Of “Beast” Release!!