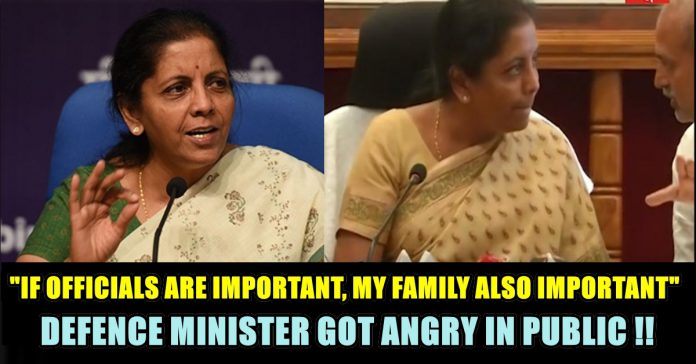 A day after reports surfaced of Union minister Nirmala Sitharaman getting into a public spat with Karnataka minister Sa Ra Mahesh during her visit to flood-affected Kodagu on Friday, the Ministry of Defence has issued a clarification and termed Mahesh’s behaviour as “unfortunate”.

The release further said that Mahesh’s personal remarks against Sitharaman as cited in some news reports have lowered the dignity of the Upper House of the Parliament. The press release stated that the minister’s programme was finalised by the district administration of Kodagu in consultation with the public representatives and circulated to all concerned two days prior to Sitharaman’s arrival. Subsequently, on the request of the district administration, an interaction with the veterans was added to the schedule, the clarification further said.

After the field visits, the Union minister was interacting with ex-servicemen affected by the floods when the district-in-charge minister insisted that the meeting with the officials be conducted first. The release said that despite Sitharaman clarifying that the welfare of ex-servicemen was an essential part of the Ministry of Defence and the same was scheduled in the program, Mahesh insisted that Sitharaman immediately stop the interaction. Sitharaman proceeded to the venue of the meeting with the officials, which was already set up for the press conference. The release further termed as “unfortunate” the way the district-in-charge minister behaved.

According to reports, Mahesh had asked Sitharaman to wind up the press conference citing paucity of time and an upset Union minister shot back, saying she was following “minute-by-minute” the itinerary prepared by the district administration. During the press conference, Sitharaman said to Mahesh, “I am a central minister and I am following your instructions. Unbelievable!” Later, Mahesh dubbed Sitharaman’s comments as a reaction to the demand for funds from the Centre to Kodagu. “She would have known the pain had she contested election by standing with the electorate, going to every house, meeting voters and asked their problems. She has been elected to Rajya Sabha from Karnataka,” he told a TV channel.

The district in-charge minister said the state had requested her that the Centre should extend relief for Kodagu just like it did for Kerala.

In a reference to the Union minister’s use of the term ‘parivar’ during the press conference, the release said that there has been gross misinterpretation. Sitharaman was quoted as saying by NDTV, “If officials are important, my parivar is also important. Sun News, however, quoted her as saying that the ‘Sangh parivar’ is also important.

Clarifying the use of the word, the press release said, “One of the four departments of the Ministry of Defence is the Department of Ex-Servicemen Welfare and in that context it was stated that all ex-servicemen are part of the MoD parivar. Any other inference is misconstrued and uncalled for.”

Former Karnataka chief minister Siddaramaiah also slammed Sitharaman over the row with Mahesh and said that Sitharaman was “more interested in dominating the minister” than in assessing the damage.

The former chief minister also said that “it was disappointing” to see Sitharaman lash out.

Previous articleMain Reason Behind The Rumour Of UAE Donating 700 Crores To Kerala REVEALED !!
Next article“Aishwarya Dutta Is Better Than Ramya NSK & Others” Said PRO Of Aishu !! Check What Ramya Did !!

Reviewer Prashanth who is fondly called by his followers as Panda is one of a popular movie reviewer of Kollywood industry. He is very...