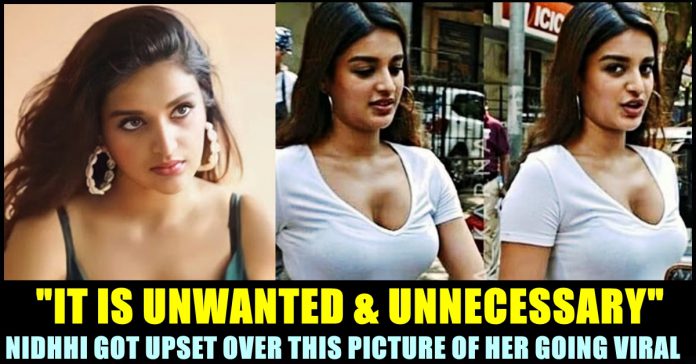 South Indian actress Nidhhi Agarwal who paired up with Simbu in “Eashwaran” and with Jayam Ravi in “Bhoomi” uploaded a story in her official Instagram account, expressing her dejection over a particular picture of her getting circulated in social media platforms. She said that anybody who has conscience won’t circulated the picture in social media platforms and said it was unwanted and unnecessary. She also termed the activity as “cheap” thrills and wanted it not to be so “cheap”.

Nidhhi Agerwal made her debut into film industry through a film named “Munna Michael” in which she shared screen space with Nawazudding Siddiqui and Tiger Sheroff. In Telugu, she made her debut in “Savyasachi” in which she acted with Naga Chaithanya and Madhavan. In Tamil, her films “Eeshwaran” and “Bhoomi” released on the same day and she has acted with Simbu and Jayam Ravi in the film respectively.

She is pretty much active in social media platforms with a huge number of followers. In Instagram, the actress enjoys 10 million followers after posting 921 posts and in Twitter she has 6 lakh plus followers.

Check out some of the recent posts she uploaded in her Instagram space :

Most recently, Nidhhi came up with a story in her official Instagram account, expressing her displeasure over a particular picture of her being circulated unwantedly. It has been reported that it was picture of the actress wearing bikini during her school days. Nidhhi didn’t release that particular photo, says a report but it got leaked without her knowledge, it added.

Expressing her dejection over the picture being circulated, Nidhhi Agerwal wrote “Very often I see this
picture of me being circulated that really has no need to be circulated. Anybody with a conscience
would not post and share such pictures. It’s unwanted the and unnecessary. Let cheap thrills not be so
cheap. Love Nidhhi Agerwal” in her story.

On the work front, Nidhhi Agerwal is expected to appear in a project of director Magizh Tirumeni and a project named “Hari Hara Veera Mallu” in Telugu. Years ago, on seeing a biki picture of the actress, a Twitter user named Naresh said “By u people only ….common ladies got raped outside ….plz maintain ….don’t show ur hot looks to social media…..u r looks remain for only movies”

Replying to his tweet, Nidhhi said “Appalled at the catastrophic thinking of this individual. Naresh please send me your address, will send you this movie called Pink. You need it.” in her tweet and it went viral among the users of the micro blogging social media site.

Appalled at the catastrophic thinking of this individual. Naresh please send me your address, will send you this movie called Pink. You need it. https://t.co/bmKNdDg0zi