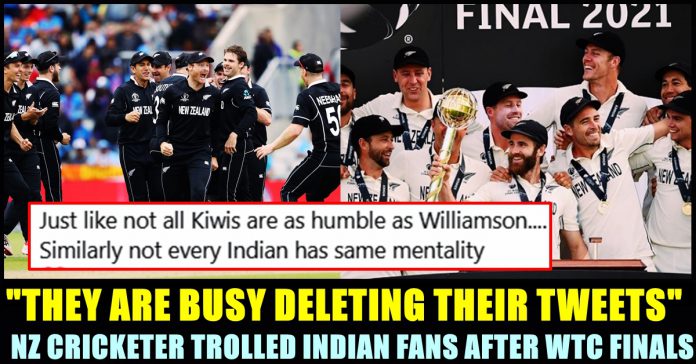 Jimmy Neesham , all rounder of New Zealand’s limited over matches, was seen involving in verbal spats with the fans of team India in twitter during the finals of World Test Championship. He who has been predicting the result of the test since day 1 in support of his home team, faced the wrath of Indian fans in the comment section and replied to few of them.

Now, after the victory of the Kane Williamson led team, Neesham, as soon as wishing his team members for pulling off the historical victory, started trolling Indian fans through his tweets. Neesham is known for his witty replies and sarcastic tweets in the surroundings of the micro blogging social media sites.

India lost the World Test Championship Finals to New Zealand after failing score enough runs in their second innings. The team got all out for 170 runs and the Blackcaps needed just 139 runs to win in the finals. The solid partnership of senior batsman Ross Taylor and Captain Kane Williamson made things easier for the New zealand team. Losing just two wickets in the fourth innings, the team registered their victory in the inaugural World test Championship tournament.

Kane scored a match winning half century and the winning runs came from the bat of Ross Taylor who scored 47 runs at the end of the 3 day test match. Various kind of reactions are emerging in social media platforms from fans who witnessed the match. Many Indian fans blamed Kohli for losing 7th ICC knock out match in a row as a captain for India.

Meanwhile, Jimmy who was pretty much active in twitter throughout the final day of the test, tweeted “UPDATE: 80% NZ, 19% draw, 1% India” when his team had the upper hand in the second half of the reserve day.

After witnessing the victory, Jimmy wrote “So proud of this group of men. 5 years ago this result would have been unimaginable. Enjoy tonight lads!” to appreciated the test side of the team he is a part of.

So proud of this group of men. 5 years ago this result would have been unimaginable. Enjoy tonight lads! @blackcaps

To a follower who said “Indian fans in your mentions seem a little sparse tonight…..” through the comment of one of his posts, Jimmy replied saying “I think they’re all busy going back and deleting their tweets calling me an idiot for suggesting NZ could win…”

I think they’re all busy going back and deleting their tweets calling me an idiot for suggesting NZ could win… https://t.co/jl1pgOYdiI

He also captured the screen shot of an Indian fan who believed that India would win during lunch and laughed out loud at it.

Obviously Indian fan got irked with the series of tweets posted by Jimmy and started expressing their displeasure over him through their comments. Check out some of the reactions for his tweets below :

You are right. Jimmy is busy trolling and certainly not a true sportsman.

@JimmyNeesh at least be a good sportsman and a human. India didn't win that doesn't mean you will troll us?
We didn't troll you when you lost the 2019 WC final in super over by boundary count.
We expect you to be the good guys of cricket.

Previous article“Yes, It Was A Copy” – Open Statement From The Director Of Nayanthara’s Recent Blockbuster !!
Next articleMoonlight Restaurant Faced Ban After Nivetha’s Complaint !!

India got all out for 170 runs in their second innings which left New Zealand to chase just 139 runs in the 53 overs...