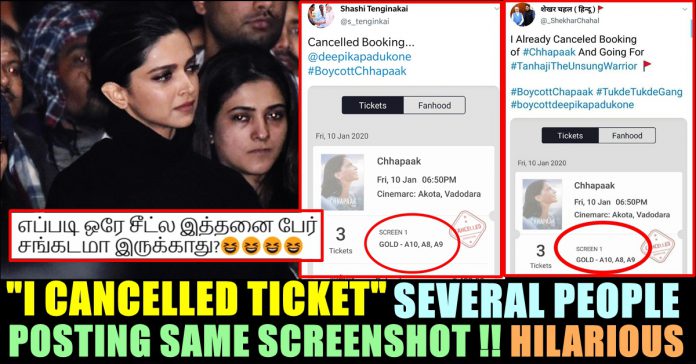 Deepika Padukone’s participation in the protest conducted by JNU students grabbed wide attention. Social media platforms filled with the pictures and videos of the actress taking part in the protest along with students. The actress visited the campus two days after the masked goons attacked Students and professors. Her visit made an impact in the twitter trending of country India. Hashtags such as #ISupportDeepika, #IStandWithDeepika trended nationwide.

Deepika Padukone who is in Delhi to promote her upcoming movie Chhapaakk, visited the campus and stood with the attacked students silently. Many user of social media including director Anurag Kashyap, Prakash Raj and Nikil Advani admired the actress and said that it is a bold movie from her.

Thank you @deepikapadukone … thank you for being a true INDIAN .. pic.twitter.com/eHiYNCXA1R

The real greatness comes when you stand with the suppressed. Thank you #DeepikaPadukone pic.twitter.com/YIKg9dh5lL

Now wait for Chhapaak to become the next super hit 😂

Women are definitely the heroes of this movement. #CAA_NRC_Protests #DeepikaPadukone #Deepika pic.twitter.com/UGN7TQPGyz

As her film Chhapaak which is based on the real-life story of acid attack survivor Laxmi Agarwal, is releasing in two days, many people who are acting against Deepika Padukone’s decision of visiting the JNU camp, has started showing their disagreement with her by trending hashtags such as #ShameonBollywood #BoycottChapaak etc.

Meanwhile few people posted screenshots of their movie ticket booking app and said that they have cancelled the already booked tickets for Chhapaak. These kind of posts surfaced after Deepika visited the JNU campus. To our surprise, all the screenshots shared by different accounts contained similar seat numbers.

This made others realize that they just shared the same screenshot to spread hatred towards Deepika Padukone and her upcoming film. Check out the screenshots here :

Apart from these screenshots, several other users also shared the same ticket tickets. This instigated a severe troll from the users of the micro blogging social media site. Check out some of their reactions here :

It is possible that hundreds of them had decided mutually to sit on each others laps while booking to watch together coz they believe in modi hai toh mumkin hai ..,.. 🤣🤣@zoo_bear @shareef_shama @samirnutty @tariqsait @dhruv_rathee @kunalkamra88 @midhatkidwai #DeepikaPadukone https://t.co/Jl6aU4SYFO

What do you think on these many people booking same number of seats ?? Comment your views below !!

In the country where people are very much worried about women's safety in public places, a disgraced act of an assistant professor only helped...