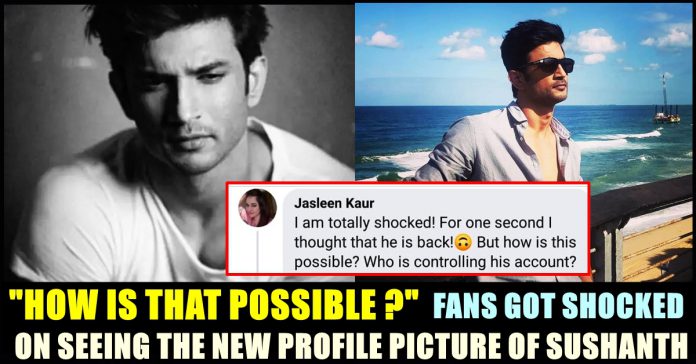 Profile picture of the official face book handle of late Bollywood actor Sushanth Singh Rajput got changed on Wednesday morning. Most of the 54 lakh followers who are following the account, got shocked and dropped various kind of comments in the post by expressing their emotions. Enormous number of fans wished the young actor was alive and few could be seen questioning whether actor got reincarnated in the comment section.

Sushant Rajput singh died by suicide on 14th of June, at his home that is located in Bandra, Mumbai. The preliminary post mortem reports revealed asphyxiation by hanging as the cause of death. Sushant’s demise shocked the entire country as the actor looked very much promising as far as his career in cinema field is concerned.

Sushanth was 34 year old while dying and left the entire country in utter shock as he a had a brightest future in the Bollywood industry. Many fans blamed the existence of Nepotism in the Bollywood town for the demise of actor as well. The official Face book account of the actor is enjoying 5.4 million followers. On Wednesday, to everyone’s shock, his profile picture got changed in the morning of Wednesday. It got changed to a picture of the actor posing with a scenic back drop by wearing a cooler and a grey full shirt with sleeves rolled up.

Here’s the face book activity of the actor’s account :

The post garnered 20 k plus reactions with thousands of comments pouring. “Whoever handling this page, plz dont change / update anything now… Its weird. Moreover we want to live with his memory. it hurts now when some other changes some thing… Plz dont, its a request. And he wasnt following anyone here..” a user wrote on seeing the post whereas another one said “Oh my God I’m shocked!!!!!
Who controls the Sushant account?! How did he update his profile picture knowing that the page was only managed by Sushant?! What is happening ?!!”

Check out the screen shots of such comments below :

However, it has been reported that even the actor had left the world, his social media handles are still being handled by his PR team. Reports also suggests that one of Sushanth’s friends has the access for his social media accounts. Whatever the case maybe, the new face book activity had proved that the craze level for the actor hadn’t drained still which is evident through the comments and reactions.