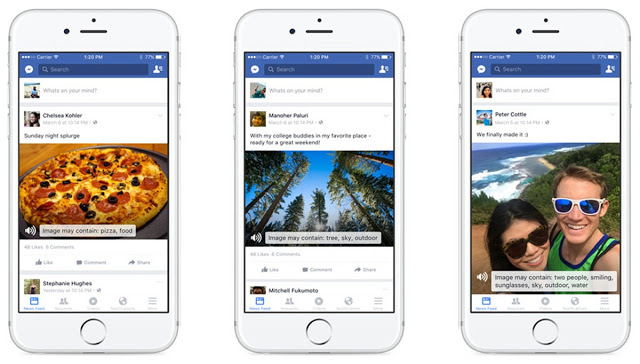 A new Facebook tool will help users who are blind or have visual impairments “see” photos by describing what’s in them.

With automatic alternative text, people using screen readers on iOS devices will hear a list of items that a photo on Facebook may contain such as “three people, smiling, outdoors.” Without the new automated photo captioning tool, screen-reader users skimming their News Feed would only be told that a friend posted a photo. Screen-reader software turns Web pages and documents into synthesized speech for people who are blind or have severe visual impairments.
“We really want to start with a set of concepts that frequently appear in photos that add a lot of value to the narrative of the photo,” Jeff Wieland, Facebook’s head of accessibility, told USA TODAY.
More than two billion photos are shared every day on Facebook, Instagram, Messenger and WhatsApp. The flood of imagery means people who are blind or have visual impairments are often unable to decipher what’s in the photos, leaving them out of the conversation.
In its first iteration, Facebook’s new automated photo captioning tool can identify rudimentary things: cars and boats, basketball and baseball, ice cream and sushi, beards and eyeglasses. In time, Facebook aims to include a much fuller description of what’s in a photo including the identity of the people in it. It also plans to expand the tool to more devices and languages as well as to all of Facebook’s family of apps, but, for now, the tool is only being tested on iOS screen readers set to English.

Facebook and other tech giants are tackling a major challenge: The World Wide Web is anything but for people with visual impairments and other disabilities, cutting them off from the basics of everyday life such as applying for college or jobs, making major purchases or getting health information.
Facebook is taking steps to re-engineer its website and mobile apps to make them more accessible. It’s also brainstorming a new generation of futuristic products that harness the power of artificial intelligence to improve the experience of Facebook for people with disabilities.
Automatic alternative text generates a description of a photo using advances in object recognition technology. The tool was requested by users with visual impairments frustrated that they were excluded from the conversation surrounding photos in their News Feed.
Even small bits of information can be helpful when a friend uploads a photo without a caption or the caption does not describe what’s in the photo, says Facebook accessibility specialist Matt King, who is blind and has been using a screen reader since college. King says he gleans clues from the captions and comments, but “you really feel excluded when you can’t see the picture.”
“Obviously photos and videos are a lost cause because I can’t see those anymore,” says Marco Salsiccia, a former animator and visual effects artist who lost his sight two years ago due to medical complications from surgery. Today he works as an advocate for the blind and on a contract basis as an accessibility specialist at Lyft. He took part in a group that tested the new photo-captioning tool for Facebook.
With the new Facebook tool, Salsiccia says: “I am less prone to skip over a photo now.”
Salsiccia says he welcomes innovation from Facebook but says the company has a long road ahead to give equal access to people with disabilities.
“It’s still not perfect, but within the past year or so Facebook has made some decent strides in fixing some of the access issues,” he said.
Among his major gripes when it comes to photos: his screen reader still can’t read him text that appears in them, such as screenshots, inspirational quotes or funny memes that pop up all the time in Salsiccia’s News Feed.