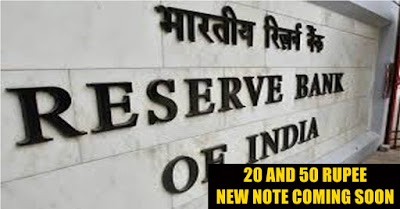 New 20 Rupees And 50 Rupee Notes On The Market Soon.

A new series of banknotes in the Mahatma Gandhi Series-2005, with inset letter ‘L’ in both the number panels, bearing the signature of Urjit Patel is to be issued by Reserve Bank of India soon. An information bearing the official news was issued by the RBI in twitter some time earlier on December 4,2016.

Issue of ₹ 20 banknotes with the inset letter ‘L’, with numerals in ascending size in number panels and without…https://t.co/EeFGlK1Q2w

The new notes would face the same security features as seen as in the 500 and 2000 Rupee notes issued earlier. Thus they would have an ascending font of numerals in both the number panels and without intaglio print issued earlier in Mahatma Gandhi Series- 2005 through Press Release No. 2016-2017/1004,” it reads.

Issuance of ₹ 50 banknotes without inset letter, with numerals in ascending size in number panels, and without…https://t.co/DaFWRuCEGA

The year of printing ‘2016’ printed on the reverse of the banknote, RBI said in a release.

Previous articleHere’s Why Your Whatsapp May Stop Working In 2017
Next articleRupees 2 Lakh Crore Black Money Declared By A Family In Mumbai Comes Under Investigation.

After the defeat of team Pakistan, term "Karma" trended in the micro blogging social media site with the two different videos of Pakistan seamer...