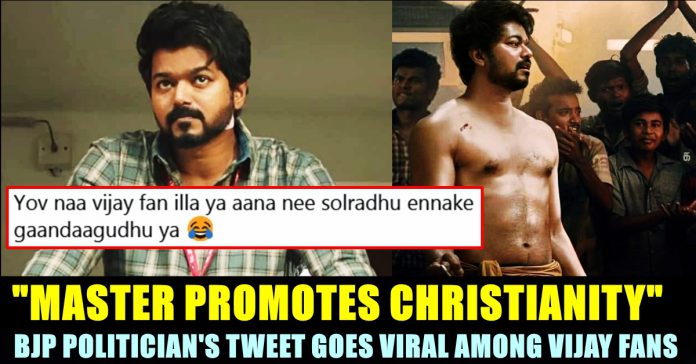 Ever since releasing in theatres, the Vijay-Vijay Sethupathi starrer “Master” film is grabbing headlines in daily basis for various kind of reasons. On Monday, when a news on Tamil nadu cricket team celebrating their victory by shaking their legs for the opening song of “Master” surfaced, Amar Prasad Reddy of BJP criticizing the film for promoting Christianity also got reported in the Internet.

The film “Master” became a subject to both appreciation and criticism as it became accessible to a wider audience now. After becoming the first Tamil film to get released on OTT platform in just 15 days from its theatrical release, “Master” is now being decoded frame by frame by fans of Tamil film industry. Meanwhile, a BJP politician named Amar Prasad Reddy whose bio says that he is a president of National youth council of India, uploaded a tweet criticizing “Master” film claiming that the film promotes Christianity.

He also stated that the film is a complete disaster and advised Vijay to choose good scripts in future by tagging his official twitter account. “Vijay’s Master Movie is a complete disaster. Vijay is a good actor but unfortunately someone misguided him. This movie promotes Christianity & the language is very abusive. I never thought Vijay go to that low. Select right scripts that spreads positivity in society.” read the tweet of Amar about “Master” film.

.@actorvijay's Master Movie is a complete disaster. Vijay is a good actor but unfortunately someone misguided him. This movie promotes Christianity & the language is very abusive. I never thought vijay go to that low.
Select right scripts that spreads positivity in society.

This tweet, predictably didn’t go well among the fans of actor Vijay. While many fans abused the politician, a set of fans started assuming the tweet as a promotion for the film which is still running in the theatres. Check out some of their reactions below :

When u said such things which means the movie was exceptionally good. Be it content or swag or its message. in all departments it scored. If u hate him for being Joseph VJ, then we TN will support him unanimously. @irshad5005 @ghilli005 @shagul_kumar

We fans might fight over silly BO collections but when some1 mocks our heroes……..screeen kezhinjidum

I am also a Bjp supporter, but now I got an example why Tamilnadu kept Bjp away from power. I don't understand where this movie promoted any religion 😅 there are more problems to worry than some movie

Film demoted the usage of drugs among present day youths, and I loved it. No way it preached about any religion. Even if it had promoted a religion, how come it's 'going low'?

Please focus on coming elections rather than putting reviews.. movie already super hit..
Better Try to be in people's side..

“Master” film had Vijay as an alcoholic professor and Vijay Sethupathi, Arjun Das and Malavika Mohanan as a gangster, henchman and a college professor respectively. Locking horns with John Durairaj played by actor Vijay, Vijay Sethupathi who represented Bhavani, comes as a ruthless killer who uses juveniles as his pawns to establish his criminal enterprise.

Comment your views on this opinion of Amar Prasad Reddy about “Master” !!

As soon as the report on Ravindra Jadeja taking over the captaincy from Mahendra Singh Dhoni surfaced, a number of fans started circulating one...