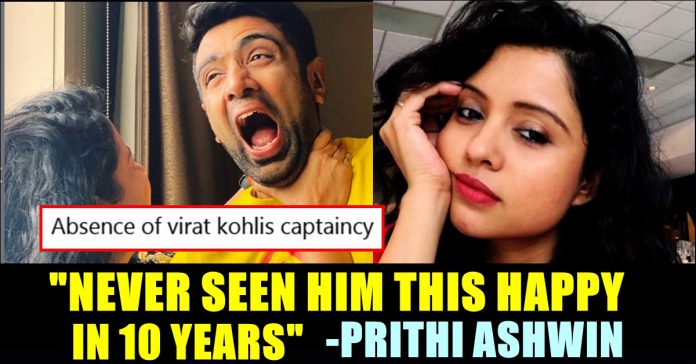 Team India registered a historic win in the Australian soil through their terrific performance in the second test that took place in the Melbourne Cricket Ground. After restricting Australia for just 195 runs in the first innings, Team India scored 326 runs in the second innings with the help of skipper Rahane’s outstanding century and Ravindra Jadeja’s half century. Again, the bowlers displayed some quality effort and made Australia all out for 200 runs. In the fourth Innings, India needed 70 runs to win and the team scored it effortlessly by losing just two wickets.

Tamil nadu based Indian cricketer Ravichandran Ashwin picked five wickets in the two innings and did his part to help team India to clinch the victory. Ash maintained his grip over Australia’s former captain and top batsman Steve Smith. He dismissed him for the second time in this series and saved India from his destructive batting.

After winning the game, in a way of celebrating the victory, Ashwin came up with a tweet writing “When your backs are up against the wall, lean back and enjoy the support of the wall!! Well done to the entire team and what a win that was” with a picture of himself posing with Jadeja, Umesh Yadav, Chateshwar Pujara, Ajinkya Rahane, Ravichandran Ashwin and Jaspirit Bumrah.

When your backs are up against the wall, lean back and enjoy the support of the wall!! Well done to the entire team and what a win that was💯🔥🔥🔥🥳🥳.
Special mention to Mohd Siraj and @RealShubmanGill 👏👏..@ajinkyarahane88 @cheteshwar1 @Jaspritbumrah93 @y_umesh @imjadeja pic.twitter.com/4t8IlxZFlW

Many cricketing legends including Sachin tendulkar, Virender Sehwag, Virat Kohli lauded the terrific performance displayed by the Indian team. Meanwhile, Prithi Ashwin, wife of the West mambalam based cricketer came up with a tweet cherishing about her husband’s never before seen happiness after winning the match.

She said that she never seen her husband feeling this much happiness in the past 10 years. “I have seen/ spoken to Ashwin after every Test he has played and after a lot of wins. But I have never seen him this happy, satisfied and light (can I say?) with a smile in his eyes in almost 10 years.” she said in her tweet.

I have seen/ spoken to Ashwin after every Test he has played and after a lot of wins. But I have never seen him this happy, satisfied and light (can I say?) with a smile in his eyes in almost 10 years. https://t.co/8f0qUW489S

“So tonight MMKR sure.” she added in her next tweet denoting that their favorite film is Kamal Haasan’s “Michael Madhana Kaama Raajan”

So tonight MMKR sure.

Many fans speculated various reasons for the happiness of the cricketer. Few of them humorously said that Ashwin felt happy due to the absence of Kohli’s captaincy whereas others said that it is because he picked Smith’s wicket.

Why not. ? He has picked Smith and Labuschagne twice in four innings, already. The magnitude of his magic speaks there itself. He should lead the bowling attack like the way he did in this test. Coz apart from being a great match winner, he has a superb cricketing brain ❤️ #3-1

Many people question about Ashwin performance in away test! Hope they have got the reply! And Ashwin will improve day by day his away record too!

I have never seen such dominance by @ashwinravi99 in overseas like this tour he was class want to see more such performance going forward 👏👏No.1 test batsman @stevesmith49 said that no spinner has dominated him like #Ashwin

Previous articleSocial Media Divided After Seeing The Way Akila Narayanan Treated Her Daughter !!
Next articleJUST IN : Vijay To Become Director For The First Time !!

PR Sreejesh, goal keeper of Indian men's hockey team expressed his emotion after helping the team to win a medal after 41 years by...

The star's kid has taken the internet by storm. Sanjay, the 18-year-old son of Ilayathalapathy Vijay, has worked on a short film, and it...