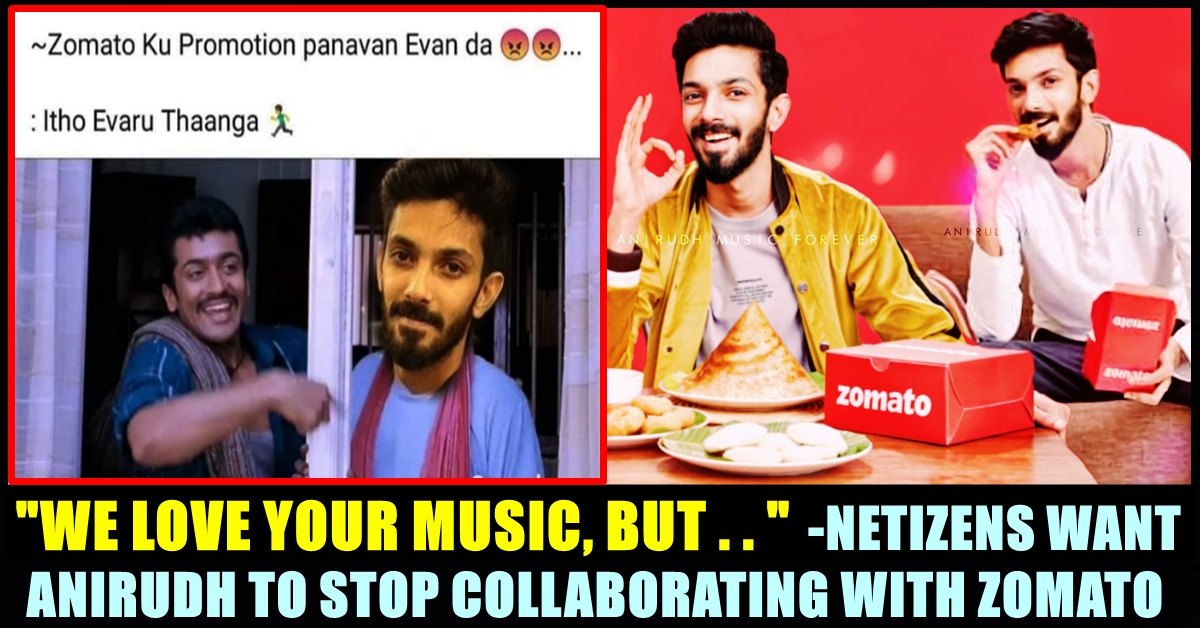 A number of posts from Twitter users requesting music composer Anirudh Ravichander not to endorse the online food delivery app are flooding the micro blogging social media site. In the public note, the company cited their collaboration with Anirudh and asked apology to Vikas who raised voice against Zomato’s call centre agent as she believed that “Hindi” is India’s national language and insisted on learning it a “little” bit. However, Deepinder Goyal, founder of the company came up with a series of tweets, suggesting people of country India to have “chill and tolerance”.

“This customer care agent’s statements do not represent our company’s stance towards language and diversity. At Zomato, we are building a Tamil version of our app. We have already localised marketing communication in Tamil for the state (e.g. we also signed up Aniruddh Ravichander as our local brand ambassador), and we are in the process of building a local Tamil call/support centre in Coimbatore” the public note of Zomato read.

Vanakkam Vikash, we apologise for our customer care agent's behaviour. Here's our official statement on this incident. We hope you give us a chance to serve you better next time.

However, after seeing Deepinder Goyal’s tweets on suggesting people to have some “tolerance”, users of Tamil social media platforms started requesting Anirudh not to endorse their brand anymore. “hope Anirudh Ravichander comes out of zomato…..i am sure he will as he is a Tamizhan” a twitter user wrote whereas another one said “Anirudh sir we Tamilians love your music a lot pleases don’t support this ZOMATO”

Memes and trolls attacking Anirudh for the advertisements he did for Zomato are also surfacing in the Internet. Check out some of the reactions below :

@zomato hope Anirudh Ravichander comes out of zomato…..i am sure he will as he is a Tamizhan

#Reject_Zomato
Anirudh sir we Tamilians love your music a lot pleases don't support this ZOMATO 😡😡😠 which imposes HINDHI into our Tamilian culture 🙏🙏🙏🙏🙏 pic.twitter.com/KKfLvCA7Vz

Diverse culture? appointing Anirudh is not an attempt to “localise” your product in TN whereas it’s to popularise your brand. Your ad asks tamils “Saapteengala?” But your customer care says “learn hindi”. How difficult is it to recruit Tamil speaking support folks? @zomato pic.twitter.com/EkjCchMnRC

Why does the entire onus fall on the employee here? For the meagre he/she earns they want them to perfect? Zomato takes no responsibility but to terminate an employee, just to look great on SM and unnecessarily flaunt some partnership with Anirudh lmao. Kekkave illa.

Dear @zomato @zomatocare , Problem is not the particular employee but the system. Instead of spending on Anirudh for promotion spend on training.

“Kurumpadam” Released For Priyanka Deshpande !! WATCH
“No Bindi No Business” Trending In Twitter !! Check Why
Advertisement