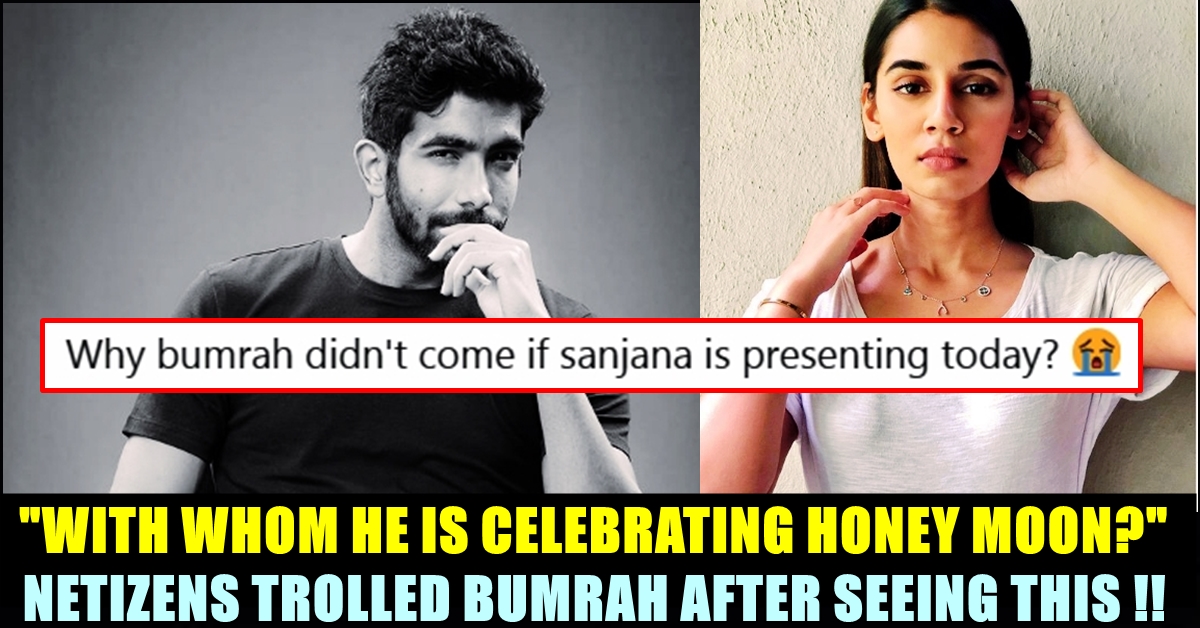 After seeing Sanjana Ganesan actively presenting the second ODI match between India and England, fans started trolling the Indian pacer who got married to her recently for not making his come back into the team. The absence of Bumrah, Shami, Jadeja made a huge impact in the team as they lost the match miserably. Now, on seeing Sanjana Ganesan at work, fans started questioning what Bumrah is doing alone and started making fun of him.

After several link ups and rumours with popular personalities such as Anupama Parameshwaran, Rashi Khanna, Bumrah surprisingly announced that he got married to sports presenter Sanjana Ganesan through his social media posts. Due to the COVID 19 pandemic, the information about their marriage ceremony got out only after the couple announced about it in their respective social media accounts.

“Love, if it finds you worthy, directs your course. Steered by love, we have begun a new journey together. Today is one of the happiest days of our lives and we feel blessed to be able to share the news of our wedding and our joy with you. Jasprit & Sanjana” said Bumrah while announcing about his marriage.

The right arm pacer took break from representing team India internationally and involved in preparing for his marriage. Even days after his marriage ceremony, Bumrah didn’t make his presence in the playing 11 of team India and fans presumed that he would be busy celebrating his honey moon.

To our surprise, on Friday, Sanjana Ganesan was seen presenting the second one day International between Idia and England by making her appearance in Star Sports studios. Prior marriage, Sanjana was busy presenting sports shows and has hosted important sports events such as IPL and world cup 2019. She is widely known for her collaboration with star sports network.

She was working with them since 2016 and has co-hosted the channel’s popular post match show Match point and Cheeky singles. On seeing her presenting a match that took place soon after her marriage, fans got surprised and lauded her dedication. She hosted the Cricket-live, the pre match show, before the start of the 2nd OD/i between India and England.

In the meantime, many fans questioned the whereabouts of Bumrah who was last seen during the third test between India and England. Many trolled him asking what he is doing alone at honey moon without Sanjana and demanded his immediate come back to the team.

If Sanjana Ganesan is in Star Sports studio, who is Bumrah with? Sanjay Bangar? #INDvENG

Sanjana is in studio, means she is in bubble too, Bumrah bhai alone at home. 🤔😓

Sanjana Ganesan is back to work and Jasprit Bumrah is not. #INDvENG

Great to see @SanjanaGanesan back in the Star Sports studio. #INDvEND

If Sanjana Ganesan is in Star Sports studio then who is with Bumrah on his honeymoon? #INDvEND

Why bumrah didn't come if sanjana is presenting today? 😭#INDvENG

Sanjana is back in the studio, what's Bumrah doing alone in honeymoon?

.@SanjanaGanesan is back with @StarSportsIndia, where is @Jaspritbumrah93?! #JaspritBumrah #INDvENG