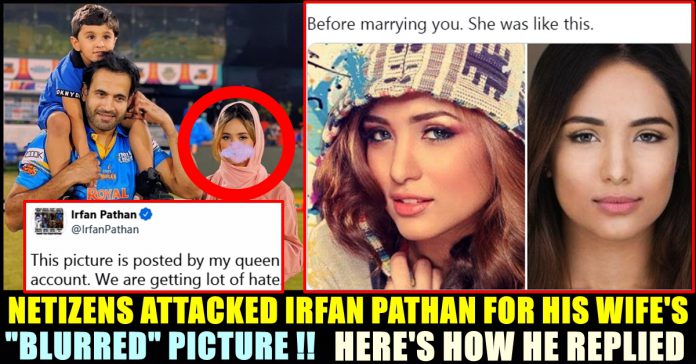 Former Indian all rounder cricketer Irfan Pathan has been pretty much active in social media platforms since he started his career as a commentator in IPL tournament. He has been posting tweets, not only regarding game cricket, but also raising voice for social issues. Most recently, Pathan came up with a post, talking about the hate he received for a picture uploaded by his wife in his son’s official Instagram account. The couple seemingly received lot of hate as the family picture contained a blurred image of Pathan’s wife.

Irfan Pathan married a Hyderabad-based model, Safa Baig, on 4 February 2016, in Mecca. On 20 December 2016, Safa Baig gave birth to a male child and named him as Imran Khan Pathan. The couple is running an Instagram account for their four year old son which has 70k plus followers as of fow. On Tuesday, Safa uploaded a picture in the account and captioned it as “Together is our favourite place to be! 💕 #Love #Family”. Irfan Pathan replied to the post, writing “My queen 👸 my prince”

On seeing, Safa uploading the picture by blurring her face, many users of Instagram spewed hatred at the post, criticizing the choice of her. Many believed that Pathan forced her to do and slammed him as well. Check out some of their reactions below :

Reacting to these kind of comments, Pathan took his official twitter account and wrote “This picture is posted by my queen from my son’s account. We are getting lot of hate.Let me post this here as well.She blurred this pic by her choice. And Yes, I’m her mate not her master;).” as his caption.

This picture is posted by my queen from my son’s account. We are getting lot of hate.Let me post this here as well.She blurred this pic by her choice. And Yes,I’m her mate not her master;). #herlifeherchoice pic.twitter.com/Xy6CB2kKWA

Love you @IrfanPathan Sir and solidarity to you and your Family !

May Allah protect you and your family , Aameen 🤲#Irfanpathan

She was a model, she chose to show her face off then and suddenly she doesn't wants to? 😜

Even an international cricketer face abuses and hatred here because of his religious identity.

Sir don't you think we are setting a bad example for the young girls growing up. I know it might be her own choice. Still i think for the betterment of women becoming strong, they need to have bit more freedom.

Video Of Man Saying That He Got Slashed By Seeman Party Members Goes Viral !! HORRIFIC !!

We need no introduction for Seeman, a Tamil politician, Tamil Thesiyam ideologist and the chief-coordinator of the political party, Naam Tamilar Katchi in Tamil Nadu....