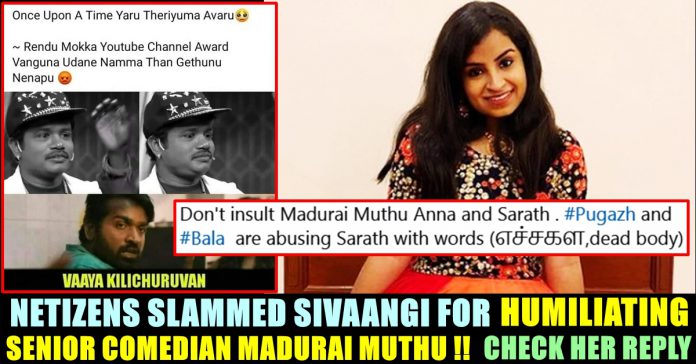 Netizens Slammed Sivaangi For Humiliating Madurai Muthu !! Check Her Reply To Them

A number of online users came up with posts condemning Sivaangi of “Cooku with Comali” for an incident that took place in one of the recent episodes. After seeing her making a derogatory comment against “Madurai” Muthu, a senior stand up comedian while doing her task, people who have been following him for years got upset and expressed their emotions over tweets, posts and memes. Supporters of the singer defended her action and she herself came up with a social media post indirectly addressing the issue.

The show became a huge hit among the Television and Internet audience. Not only the ladies, even youngsters including college, school students started celebrating the show as it mainly concentrates on providing humour unlike other cookery shows. In one of the recent episodes, Madurai Muthu who is known among audience since “Asathapovathu Yaaru” times, trolled Sivangi by asking herself and Sarath to sing while cooking.

Replying to him, Sivaangi, immediately said that she will beat him with broom stick for the sake of rhyming. Soon after saying it, Sivaangi realized that she said something inappropriate to the senior comedian.

Though Madurai Muthu handled the situation in a cool manner, netizens who were watching the show keenly, got upset and started slamming the singer for the way she behaved in that episode. Many stated that he is a senior most comedian in Television industry and condemned her for disrespecting him.

“Don’t insult Madurai Muthu Anna and Sarath . #Pugazh and #Bala are abusing Sarath with words (எச்சகள,dead body) do you think it’s comedy . please stop doing such things” wrpte a follower out of dejection whereas another one said “MaduraiMuthu is legend of standup comedy and my fav too. Salli guys like #Pugazh and #Shivangi are defaming him nowadays just to get limelight dai @vijaytelevision salli!!”

Agreeing with this meme completely… Insulting him too much even for entertainment is very irritating…. Last week shivangi said "thodapakataila adipen"(accidentally). But we couldn't see any apologies for that… @vijaytelevision #cwc team please don't entertain this pic.twitter.com/l0Soq33KUV

+1 #MaduraiMuthu is legend of standup comedy and my fav too. Salli guys like #Pugazh and #Shivangi are defaming him nowadays just to get limelight 🤦🏻‍♂️ dai @vijaytelevision salli!! https://t.co/CMi8YNhxOT

Reacting to these many comments, Sivangi, in her official Instagram account came up with a story saying “Some timely actions won’t define our character. If they target/corner you for that action then they do not know you”

Today, Sivaangi came up with another post through her Twitter account which said “whatever you do, good or bad, people will always have something negative to say about you and that’s life”

Previous articlePolice Officer Ditched Her Job & Became An Adult Star !!
Next article“I Can’t Even Stay In My Own House” – Woman Mentally Harassed By Her Apartment Watchmen