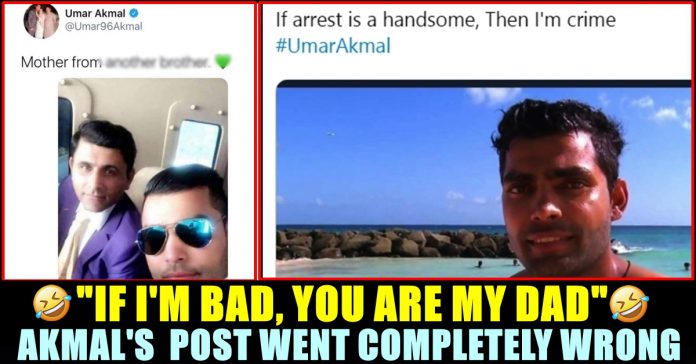 Pakistan team’s prominent cricketer and Kamran Akmal’s brother Umar Akmal getting hilariously trolled in social media platforms for his messed up caption for a post of himself in Twitter. Screenshot of the deleted tweet is going insanely viral with similar captions that was posted by the cricketer.

Umar Akmal uploaded a picture of himself with his former teammate Abdul Razaq and wrote “Mother from another brother” instead of writing the actual saying “Brother from another Mother” which is used to mention our closed ones.

Though the cricketer deleted the tweet now, the screenshot of the same is doing rounds under various hashtags such as #UmarAkmalQuotes etc. “Form is class, But temporary is permanent” wrote one of a Twitter user to troll Umar Akmal whereas the other one “If I am bad, you are my dad”

Check out some of their reactions to that deleted tweet of Umar below :

If you are free at something, never do it for good – Umar Akmal

If Suspended is a Crime, Then Fixed Me – #UmarAkmal pic.twitter.com/RORJ9BrXKz

“If being Arrest is crime than Sexy me “ 😄

Corruption has been suspended by #UmarAkmal, pending an investigation by an Anti-PCB body. Day for sad cricket and Quetta Gladiators. pic.twitter.com/WjWazeEBrr

If I am bad, you are my dad

My based is treat on how u attitude me
~Umar Akmal pic.twitter.com/PIP4VLTxXK

Meanwhile Umar Akmal was suspended by Pakistan Cricket Board on Thursday for breaching its “Anti Corruption Code”. The suspension comes hours ahead of the start of the Pakistan Super League (PSL) 2020.

Umar Akmal will not be able to play for defending champions Quetta Gladiators in PSL 2020 and will not be able to take part in any cricket-related activities pending an investigation ‘being carried out’ by PCB’s anti-corruption unit. While the nature of offense has not been revealed by the PCB, the apex body of Pakistan cricket said Quetta Gladiators can look for a replacement for Umar Akmal.

It seems that Umar is having the toughest phase of his lifetime !! Comment your views !!

A four-and-a-half-minute promo song from Nayanthara’s upcoming film, Kolamavu Kokila, was released on Sunday. The makers have also confirmed the release date of the film as August 17 towards the...