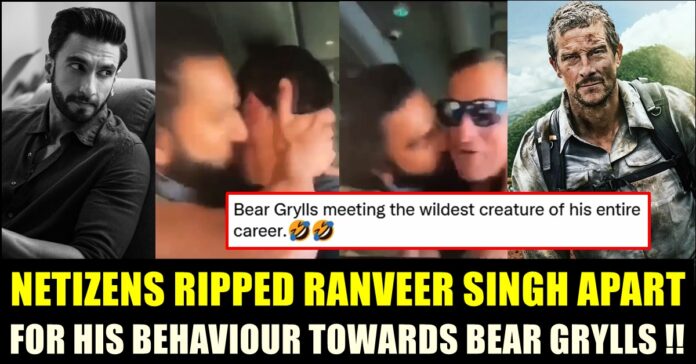 Bollywood actor Ranveer Singh who is known for his “extrovertism”, joined hands with popular survival enthusiast Bear Grylls who is known for his show ” Man vs Wild” in discovery channel for a special episode “Ranveer vs Wild” which recently got dropped online for public eye. Among all the adventures the Bollywood actor went through, a clip that shows himself kissing Bear Grylls multiple times became a subject to severe online trolls as Netizens felt Ranveer is making Grylls uncomfortable with his behaviour.

We have seen Bear Grylls go into the jungle and have adventures with Indian celebrities before. Many including Akshay Kumar, Ajay Devgn to Rajinikanth and even Prime Minister Narendra Modi have had their wilderness survival moments with him. Now, Ranveer has decided to go face an adventurous trip with Bear Grylls and the show started streaming in Netflix.

In the show, Ranveer escapes bears and braves harsh terrain, goes into a Siberian forest in search of a rare flower during his stint at surviving the wild with Bear Grylls. The premise for the adventure is simple. Self proclaimed hopeless romantic Ranveer is in the Serbian wilderness to obtain a rare flower called Serbica Ramonda for his wife Deepika Padukone. As said earlier, helping him is the renowned survival expert Bear Grylls. 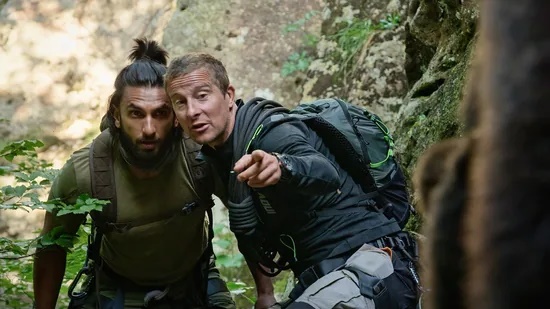 The 90 minute show is a fun adventure which features good doses of drama, comedy, and a truckload of Ranveer Singh’s energy. While Ranveer’s energy lends itself quite naturally to the format, his hyper active, almost-maniac self kept the show engaged and it also left Ranveer in the middle of online trolls.

In a clip that is doing rounds in social media platforms, Ranveer singh could be seen kissing Bear Grylls multiple times in the cheek. On seeing the video, a twitter user said “Bear Grylls meeting the wildest creature of his entire career.🤣🤣” whereas another one wrote “Seeing a Britisher terrified of an Indian😹🤣this is epic”

As this act created a hostile work environment for bear Grylls he can launch a sexual harrasment case against ranveer. Thanks co. for the POSH one hour crash course.

No animal scared him more

Seeing a Britisher terrified of an Indian😹🤣this is epic

thinks years and years of wilderness… eating and drinking all sort of weird things, and Grylls wakes screaming dreaming of this in nights

What’s wrong with this guy? https://t.co/8U4Kc7fhTL

I’ve seen this man drink his own piss out of a snake carcass… and he looked more comfortable doing that https://t.co/gUFvvQQfyZ

There’s a difference between being energetic/ enthusiastic & being cringe
He needs to understand this. https://t.co/0BXhySJD40

Bear Grylls has lived in the coldest places eaten raw snakes and drank his own piss to survive but even for him this is too much to handle https://t.co/ouDbXM6HXE

How is Ranveer Singh such a big embarrassment, but still manages to appear saner than his wife?https://t.co/zXv7oFSL98

I don’t think when he said he was Into the Wild, he meant this. https://t.co/3ruujtKN8E

The Animal he never faced https://t.co/FjQTwBJzS2