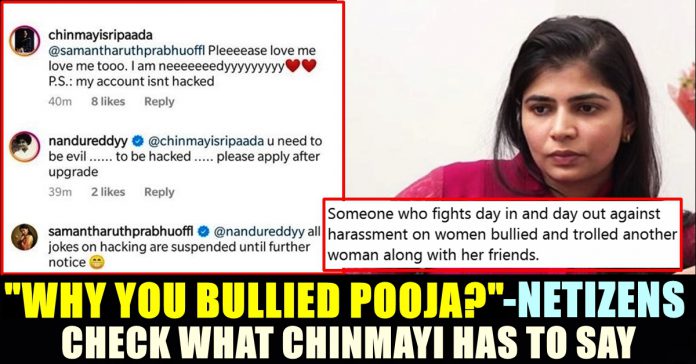 For involving in a conversation with actress Samantha and director Nandini Reddy through which they trolled actress Pooja Hegde, Singer Chinmayi is being questioned by several number of social media users. Chinmayi is very much known for raising voice against women harassment as she one of the prominent names in South Indian movie industry who initiated #MeToo movement. Now, after seeing a screenshot in which Chinmayi can be seen sarcastically trolling Pooja Hegde, online users are asking Chinmayi why she took part in bullying Pooja Hegde.

It all started when Pooja Hegde posted a story in her official Instagram account saying that she doesn’t find Samantha pretty at all. “I don’t find her pretty at all” her story read. However, the actress said that her account got hacked and deleted the posts against Samantha. Read : Pooja Hegde Criticized Samantha’s Outer Look ??

Samantha who replied to these social media activities of Pooja by uploading a selfie in her official twitter account, trolled Pooja along with her friend and director Nandini Reddy in the comment section of her post. In that post Nandhini praised Samantha by using the word “Pretty” repeatedly.

Pretty crazy…. pretty annoying… pretty stubborn ….. pretty mean(when she wants to be )….. pretty much baby 😂😂😂😂 @samantharuthprabhuoffl you are Pretty much all those things and that’s why we love u

Chinmayi joined the conversation and did her part too. Though the trio deleted their comments, screenshot of it is going viral in the micro blogging social media site. Check out the viral screenshot below :

Chinmayi also posted a tweet writing #TeamSamantha to extend her support to her best friend in twitter. Triggered netizens asked Chinmayi why she is now encouraging fan wars as she earlier posted tweets against it. One of a user wrote “Someone who fights day in and day out against harassment on women bullied and trolled another woman along with her friends. Irony just died a thousand deaths.” to slam chinmayi.

Someone who fights day in and day out against harassment on women bullied and trolled another woman along with her friends.

Replying to this accusation, Chinmayi accepted that she threw a shade and it was unnecessary. She said that she can’t be mum on seeing threats on rape and sexual harassments just because she did a silly banter online. She also compared her comment against Pooja Hegde with people calling her as “Prostitute”. “Anyway its not like all of you calling me a prostitute.” she wrote in her post.

As I said – a silly banter was unnecessary from my side. Anyway I dont watch while people send rape threats and photoshop genitalia photos on children’s faces. What I face day in and day out from the community here is sexual harassment and I think the majority is this. Thank you

Here’s how Chinmayi replied to few more users who criticized her :

I threw shade. I am not proud of it. But at least I ll agree what I did and apologize. Feminism is definitely not appearance shaming someone else. However I didn't call names; I just got called a lot of abuse my men like you though.

Considering you dont even dare to use your own name; you think how YOU define me as a human being or feminist matters? Sowwie kid – your opinion doesnt matter to me

Comment your views on these replies of the singer !!