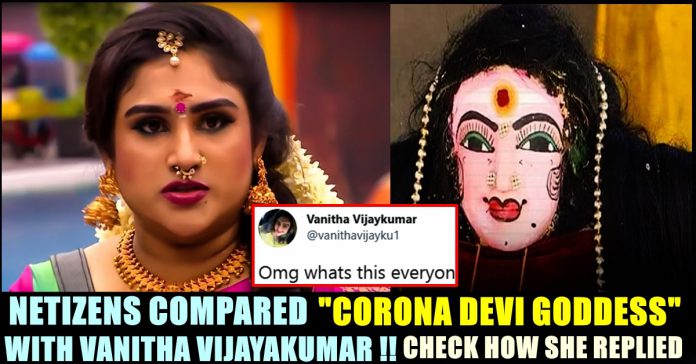 Amidst the surging cases of COVID 19 virus in state Tamil nadu, people at the outskirts of Coimbatore district came up with a temple for the deadly virus to get protection from it. The district already has a “Plague Mariamman Temple”, dedicated by the faithful to the deity Amman seeking her protection when the plague struck the district about 150 years ago. In the same temple, an idol named “Corona devi” has been mounted and the pictures of their goddess are doing rounds in social media platforms.

The 'Corona Devi' temple has been built in Coimbatore, India, and the priests await for Dakshina. Business start!
pic.twitter.com/K7jd8yCgib

Sources said that daily prayers are taking place in the temple, seeking blessings from the 1.5 tall black stone idol to save people from the deadly virus. The prayers will take place for 48 continuous days, said the reports. It has been reported that only priests and mutt officials are allowed inside the “Corona Devi” temple in the view of the pandemic. The public are strictly not allowed to visit “Corona Devi”, said the mutt officials. A Mahayagam or a special yajna is expected to be organised in the last day of the prayers.

“Following the footsteps of our ancestors, we have installed an idol for “Corona Devi”, because we believe God will help the hapless. We will be conducting special prayers for 48 days and only adhinam staff will be allowed to participate in the prayers” said Sri Sivalingeshwara Swamigal. “Devotees would be allowed to visit only after the special prayers.” he added and requested them to pray from their homes.

As soon as the news surfaced in media, pictures of “Corona Devi” went viral in social media platforms with various kind of reactions. Check out some of them below :

One more to the list of India's 330 million Gods & Goddesses. A New Temple for the New Goddess: 'Corona Devi' pic.twitter.com/6ZJcncYnK2

A closer look of #Corona Devi statue 🤣🤦‍♂️ #COVID19India
Some bugger sure might be earning with this…. doing poojas to what not.😀 pic.twitter.com/pCUawxN6sx

Reacting to this tweet, Vanitha replied wondering why people are keep sending memes and pictures based on it. “Omg whats this everyone has been sending me this pic and memes” her reply read.

Omg whats this everyone has been sending me this pic and memes https://t.co/AOTB0WSBBN

Previous articleEverything You Need To Know About The Complete Lockdown !! Details Here :
Next articleAnikha Opened About The Scariest Love Proposals She Received !!