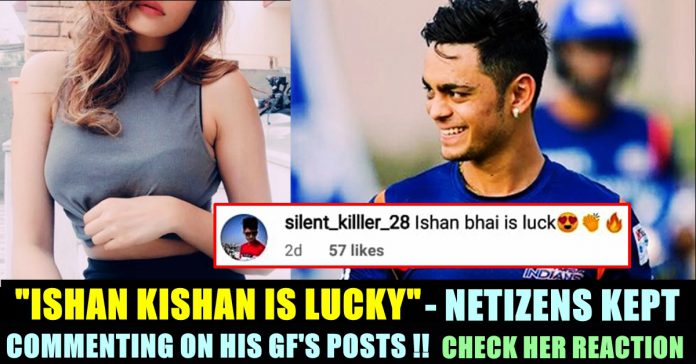 We all would have faced the embarrassment in our school days where a bunch of our friends would call a girl/boy by shouting our name just because we revealed about our emotions towards her/him to them. The grown-up or digital version of it is taking place nowadays to the partners of well known celebrities who are associated with cinema/ sports industry. The most recent victim of the embarrassment is Aditi Hundia, alleged girl friend Ishan kishan, a young lad who made his debut for Team India in the second t20 between India and England.

Ishan who is known for representing Mumbai Indians in IPL tournament, stunned the cricketing community with his terrific knock in the debut match he played for his national team. The 22 year old had a debut to remember as he smashed a match winning knock of 56 off 32 which laid foundation for India’s seven wicket victory. He received the man of the match award for his fearless innings in his debut game.

Though he did well in the opening slot, the team management decided to make him play as an one down batsman in the third t 20 in order to discover the right combination for the upcoming t20 world cup. The cricketer failed to perform in the second International match he took part. However, he is making headlines for a choice he made in personal life. Several media portals has been reporting about the girl friend of the young sensation. It is believed that Aditi Hundia who is pretty much popular in the fashion world and Ishan Kishan were involved in a romantic relationship.

Aditi Hundi, a popular model who started her modelling career with Miss India 2017 pageant, was crowned as FBB Colors Femina Miss India Rajasthan. It is widely believed that Aditi Hundia is the one and only girlfriend of the opener. Aditi Hundia is currently enjoying 2 lakh plus followers in Instagram with fans expressing their admiration over her beauty. Her Instagram bio states that she has been a finalist in the Femina Miss India 2017 and as Miss Diva – Supranational 2018.

Several media reports emerged saying that the duo are involved in a romantic relationship for two long years as of now. Aditi’s presence in the social media posts of Ishan and vice-versa proves the same. The young model was seen cheering for the MI opener in the stadium during the IPL 2019 final between Mumbai Indians and Chennai Super Kings.

When Ishan smashed a terrific 99 during a match between Mumbai Indians and Royal Challengers Bangalore, Aditi took to Instagram and wrote “I am so so proud of you baby”, to express her love towards him.

In a way of reacting to these many comments, Aditi, in one of her posts, pinned a comment which listed out the achievements of herself. “Those who so ever just comment the name of Ishan here before saying anything remember she has her own identification, if you don’t know anything let me tell you she is Miss Supranational India 2018 and she represented India at Miss supranational which is international pageant” the comment which was pinned by Aditi read.

Actor Sanjeev Karthick, husband of Television actress Alya Manasa, came up with a story in his official Instagram handle to clear the air about...