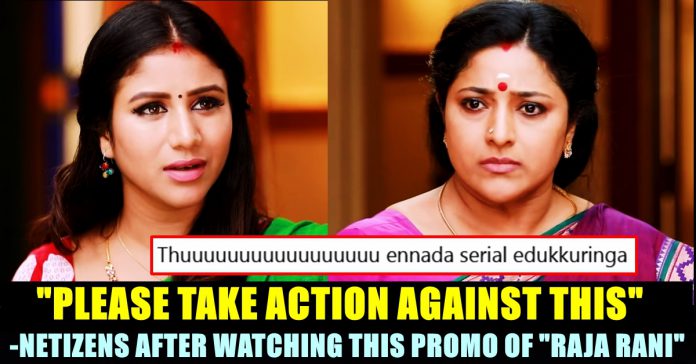 Tamil nadu assembly election is nearing and all the political party members in the state are encouraging citizens to vote for the deserving candidates. Campaigns across the state are being progressed with political party leaders are promising various developments in the state to make people vote them to the power. Election commission of India is taking necessary steps to make every citizen of the country who are above 18 years old to vote. Meanwhile, a scene that took place in a Tamil TV serial irked the social media users as it showed the lead suffering punishment from her in-laws for voting.

The highest recorded voter turnout in India was recorded in 2019 for the Indian general election at 67% which means that close to half the population does not exercise their right to vote. While we are complaining against the government and passing comments about the changes in the process of its functioning, the elections comes and goes without half of the population paying attention to it. Amidst this situation, on seeing the promotional video of the Tamil serial “Raja Rani”, many people raised voice against it and it got subjected to online trolling as well.

The promo shows the lead character casting her vote in the voting booth by having the mark in her finger. On seeing the mark, her mother-in-law questions her why she casted her vote and punishes her. “Voting is not wrong. But we don’t do it because of that one incident” says the mother-in-law before giving punishment the lead.

The soap opera that is being telecasted in Vijay Television is an official remake of Hindi serial Diya Aur Baati Hum which aired on Star Plus from August 2011 to September 2016. The core plot of the serial is about a married woman going against all odds to become an IPS officer with the help of her husband.

However, the latest promo that conveys inappropriate message to the audience about “voting”, became a subject to online trolls. A number of people severely condemned the 35 seconds video as well. “This is purely stupidity” wrote a follower of Vijay Television whereas another one criticized by saying that the original serial was made 10 years ago in north India and it is not connecting well with the Tamil audience.

Few users went one step ahead and tagged the official social media handles of Election commission and registered their complaint.

Check out some pf such reactions below :

@ECISVEEP @TNelectionsCEO This serial promotes not voting and giving punishment to character which casted vote. Take action Immediately. @ikamalhaasan sir, its against your campaign for vote. Please look into it