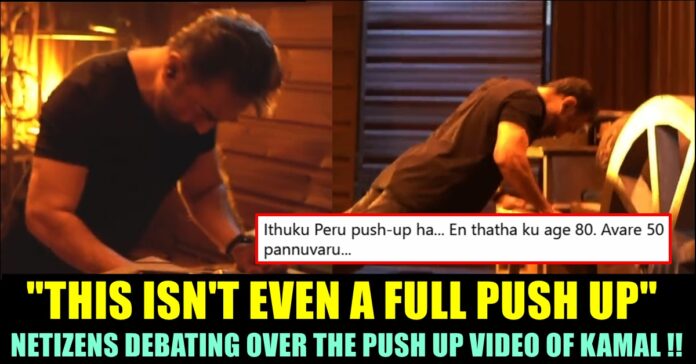 On 28th of June which marked the 26th day of “Vikram”, Lokesh Kanagaraj, as he promised in the post release interviews, has released the video of Kamal Haasan taking push ups before the shooting of the scene where his triceps are going to be highlighted. As soon as Lokesh uploaded the ide in his official twitter handle, the post garnered wide reach with various kind of reactions. A mini debate took place between the users of the micro blogging social media users on whether the 67 year old actor doing it right or not.

“Vikram” which got released in theatres on 3rd of June, is running successfully in the theatres till now. Every aspect of the film including the casting, story, screenplay, camera work, edit work and music worked well for the film as a result of which the 3 hour long film is receiving repeat audience. The film has collected 400 crore plus so far and became one of the most profitable Tamil film ever.  Today, the makers have announced July 8 as the OTT release date of the film. 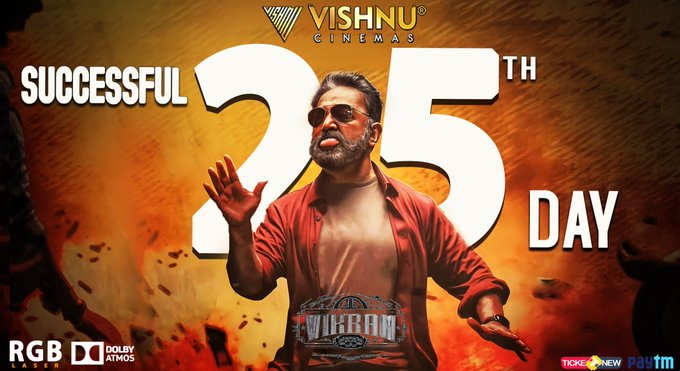 Meanwhile, director Lokesh Kanagaraj who is basking in the success of the film, in one of the post release interviews promised to release the exercise video of Kamal Haasan which he did few minutes before the climax ight sequence where his triceps needed to be highlighted in the frame. In between, Kamal Haasan gifted Loki a car, Suriya, his rolex watch and assistant directors, bikes.

The makers invited distributors, press reporters and served a feast in the success party of the film and theatres across the state celebrated the 25th day of the film as well. On the 26th day evening, Lokesh came up with the video, writing“@ikamalhaasan sir’s video as promised.. He did 26..i missed recording the initial two.. The eagle has landed🔥” as his caption.

@ikamalhaasan sir’s video as promised.. He did 26..i missed recording the initial two..
The eagle has landed🔥#Vikram pic.twitter.com/5rdKG9JPoE

The post of Loki garnered 70k likes in no time with fans lauding Kamal Haasan for his dedication towards cinema even at the age of 67. However, a number of online users questioned whether Kamal haasan is the exercise in the right way and few went on to criticize the effort of the ace actor. A debate took place between two set of fans about the 27 seconds video of the actor.

But technically this isn’t even a full push up right…

Post Covid, after all the surgeries that he went thru..💥💥🙌🏻 pic.twitter.com/XLiyIxGNDT

This is so motivating from aandavar @ikamalhaasan not only for people in cinema but in all walks of https://t.co/oiD4ETD5lE respect and love for him growing leaps and bounds.Thanks for U bro to let the world know who the #Ulaganayagan is..@Dir_Lokesh congrats on success https://t.co/WnOLiWEsBe

People who are criticizing this push-ups calling it that this not how it’s done are ignorant. He is pumping , people who regularly exercise can do this for a quick pump thats all. He can’t do a whole Propa push up routine and get tired before the scene. #Vikram #KamalHaasan𓃵 https://t.co/BYzwxvNDIU

Previous article“How Are You Expecting Tamil People To Support Your Film” – Reporter Asked !! Here’s Prithvi Raj’s Response
Next articleAjith Fans Got Upset Over This Gesture Of Madhavan !!

When Apple released the iPhone X last year, it was widely considered to be the best smartphone the company had ever made, marking a...