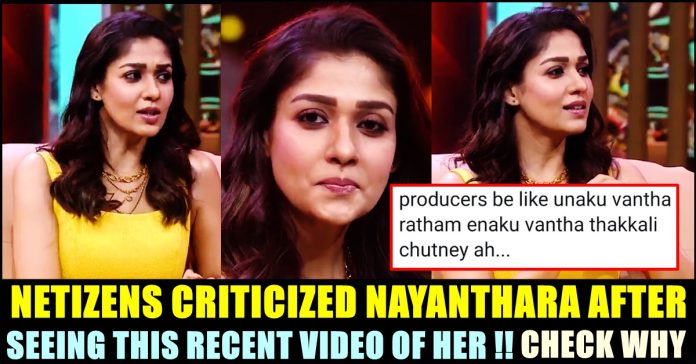 Netizens Criticized Nayanthara After Seeing This Recent Video Of Her !! Check Why

After three long years, Nayanthara appeared for a promotional interview for the first time for her upcoming film “Nettrikan” which is going to be directly released on Hot star, online streaming platform. With many of her fans celebrating Nayanthara’s presence in Television after a long time, a number of online users could be seen criticizing her for making her presence only to promote the movie which was made under her own production. The interview is going to be telecasted on Vijay Television during Sunday morning 10 : 30 AM.

Nayanthara is one of the very few female actors who rules Tamil film industry for more than 15 long years. As of today, she is the highest paid actress in South Indian film industry. She is also the only actress who manages to act in both female centric movies and hero oriented movies. The surprising fact about it, is that the “Bigil” actress shines in both the regions. Despite of her success, the actress has always been under scanner for not appearing in the promotional events of her movies. She even avoided appearing in the promotional events of Super star Rajinikanth “Darbar”, Vijay’s “Bigil”, Ajith’s “Viswasam” etc.

The actress also avoided giving interviews to Television/youtube channels. Now, after a long time she appeared in an interview for her upcoming movie “Netrikann” with popular television host Divya Dharshini. The first ever promotional video of the interview released in the channel’s official social media handles recently. The promo shows the actress donning a yellow short gown with an elegant make over that makes her look younger than ever.

With her grand entry and fans pouring love on her, Nayanthara could be seen answering to some of the personal questions asked by DD. When she asked Nayan about the Instagram post of Vignesh Shivan which showed herself wearing a ring, Nayanthara answered saying that it is an “engagement ring”. Further DD asked what she likes in Vignesh shivan the most and the actress replied back saying that she likes everything about the “Naanum Rowdy Thaan” maker, adding that she will tell about what she dislikes in him.

Though, it was not mentioned that it is a promotional interview for her upcoming movie “Netrikan”, many linked the release date of the movie, the platform the film is going to release and the channel that conducts the interview only to start criticizing the actress for appearing in interviews that promotes her own movies.

“Theatrical release other production banner will not come for promotion… But for OTT release own production coming for promotion… Some producers be like unaku vantha ratham enaku vantha thakkali chutney ah…” a twitter user named Thalapathy Jai wrote with many others making similar comments. Check out some of them below :

However, fans of the actress defended Nayanthara through their counter reactions and many others expressed their happiness over the actress appearing for interviews after a long time. Netrikann, directed by Milind Rau, will release on Disney+ Hotstar on August 13. The film was produced by “Rowdy Pictures” which is being jointly handled by Vignesh Shivan and Nayanthara. Trailer of the film released recently on Youtube and received positive reactions from the fans.

10 Best Places In & From Chennai For One Day Trip!!

People who belong to Chennai would often opt for places such as Marina beach, Vandaloor Zoo, shopping malls, Elliots beach for their trip that...