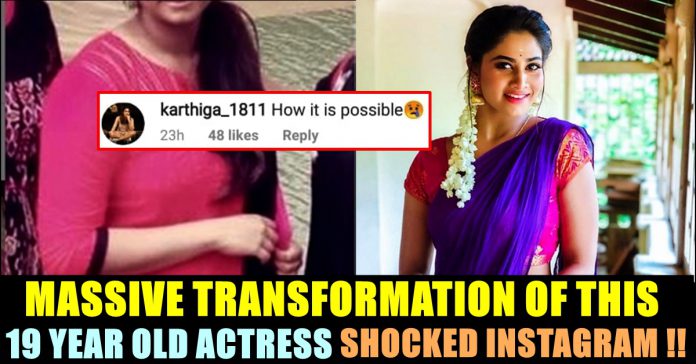 Actors exhibiting variations in their body physique to portray different roles is common. Tamil actors such as Vikram, Surya are involved in body transformations for years. In heroines, recently actress Keerthy Suresh’s transformation left the fans of Tamil cinema in awe as she reduced her weight vastly to appear in one of her upcoming film. Nazriya’s transformation after marriage with Fahad Fazil also surprised her fans.

Here’s the transformation of Keerthy Suresh :

Now, users of Instagram surprised with a transformation picture posted by actress Shivani Narayanan who is known for appearing in serials such as Pagal Nilavu, Rettai Roja etc. The 19 year old actress who has a huge fan base in social media platforms, enjoys more than 13 lakh followers in Instagram alone. Many fan pages created by her fans are emerging in various platforms of social media.

Check out some of her posts here :

Lets stay home for a while to stay together Forever . #jantacurfew

In the picture which was captured in the year 2016, Shivani completely looks like some other person which surprised her followers. Many of them lauded her for her unbelievable changeover in four years. Check out some of their reactions below :

What do you think on this massive transformation of the young actress !! Comment your views below !!

In one of the recent interviews, India's leading spinner Ashwin expressed his displeasure over a statement made by then coach Ravi Shastri after the...