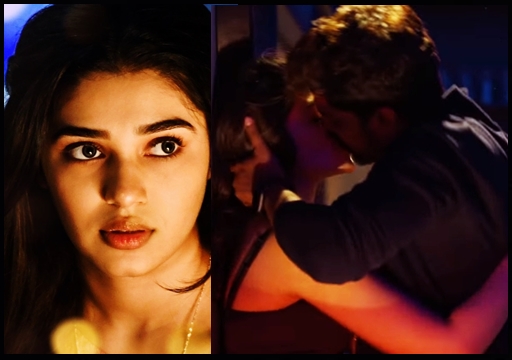 Netizens Called Out This Top Hero For Romancing Krithi Shetty !!

Trailer of South Indian actor Nani’s upcoming film “Shyam Singha Roy” released recently in youtube. Promotions for the film which is going to hit the screens on 24th of December are going on in full swing with lead actors Nani, Sai Pallavi and Krithi Shetty appearing in front of press and media. Trailer of the film showed Nani in dual roles with Sai and Krithi pairing up with him. Despite of the wide reach and huge expectations, trailer of the film didn’t go well with a number of online users a it showed Nani romancing Krithi Shetty, probably the youngest heroine of social Indian film industry.

One of the dual roles played by Nani shows him as a man from 1960s and the other Nani belongs to 2020s. The 2 minute 51 seconds long trailer showed the Nani of current generation approaching Krithi shetty romantically. A glimpse of the actor and actress performing an intimate scene was found in the trailer as well.

Nani who appears as an aspiring film director casts Krithi as is film’s heroine and makes her act in his films. A particular shot showing the actress performing a smoking scene took place in the trailer as well. However, what irked the internet audience the most is, Nani and Krithi involving in an intimate scene.

Netizens believe that Krithi Shetty who turned 18 during the September month of this year, must have been 16 or 17 during the shooting of “Shyam Singha Roy” which was produced by Nani’s Niharika entertainments. Many expressed their displeasure over 37 year old Nani romancing a minor girl for a film which is being made under his own production house.

“Creepy stuff man. Krithi shetty might be 16 years old when she did that scene with Nani. Nani should have some sense before agreeing to do those scenes” an online user said after watching the trailer whereas another user asked “Nani is making out with an under-aged girl in his new film and people are okay with it?”

Creepy stuff man. Krithi shetty might be 16 years old when she did that scene with Nani. Nani should have some sense before agreeing to do those scenes. Pedophile alert 🚨

This girl is being repeatedly exploited!! Here’s a scene from her previous movie. She was made to do this when she was just 16!! Horrifying and disgusting.🤮https://t.co/Y0KZe7OMtj

Do you know if there was an Intimacy coordinator or something ? Hell that concept itself is alien to this country. Plus, it’s child labour & exploitation. Consent of parents in Form C is not the final word.

she just turned 18 2 months ago,, so when were they shoothing this….

#KritiShetty turned 18 in September 2021,so if the kiss had happened before that,#nani a 37 year old guy kissed a 17 year old kriti shetty who is a minor …

Previous articleThalapaty Vijay Regularly Voting For This Bigg Boss Contestant !! UNEXPECTED
Next articleHeart Breaking Letters Of 11th Girl Who Ended Her Life Due To Sexual Harassment Were Found !!

Sanju Manju Said That He Wants Axar Patel To Play For India Instead Of Jadeja !! Check Replies

Ravindra Jadeja's 11 balls 31 in a crucial time helped his team to clinch the victory against Kolkata Knight Riders in the 49th league...