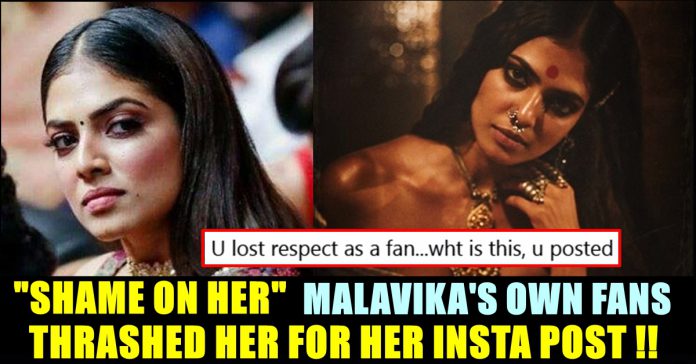 Netizens Called Out Malavika Mohanan For Her Regressive “Caption” !!

Malavika Mohanan who criticized an illustration as “sexist” which showed herself as a cook amidst other working men, called out by netizens for “colorism” after seeing a caption of the actress for some of her recent posts in the photo posting social media site. While the posts are being lauded for its aesthetic aspects in Instagram, users in the micro blogging social media sites are fuming at those. Check out the posts of the actress with the caption “Tribal skin” below :

The “Master” actress used the term to mention the tanned make up she wore for the photo shoot. This look of the actress is being adored by enormous number of her followers that even producer Sashi kanth of “Y not studios” who is known for producing “Vikram Vedha”, “Irudhi Suttru” expressed his admiration in one of the posts.

However, the caption irked few who said that she looks pretty in those photos but it is not an excuse for her actions. The way Malavika either knowingly or unknowingly trying to convey that the skin tone of women who belong to tribal community are darker, irked the users of twitter. One of her ardent fan said that she lost respect from him and another one went on to take an extreme step of unfollowing her for the caption.

Call out Malavika Mohanan's colorism!!! Yeah she's pretty and stuff but it's not an excuse for her actions!!!

U lost respect as a fan…wht is this, u posted as Tribal skin ?
dont u have any other word to say r any other skin tone is there ? @MalavikaM_ #Malvikamohanan pic.twitter.com/J6ffcE0TxJ

Could someone kindly explain to me what does "tribal skin" means, and why is Malavika Mohanan unabashedly using the term for a photoshoot that is seemingly self-promotion?

It didn't even occur to me till I saw this tweet???? She actually captioned a picture of herself trying to be a tribal princess or whatever, 'tribal skin'?? @MalavikaM_ please think about what you put out there, not cool https://t.co/GRoauIpjnN

Privilege is embedded deep inside us, the “tribals” are not even integrated well enough for us to know some of these people personally. Shame on her

It is notable that Malavika came up with a disagreement with the concept of an illustration during late April. The actress, in her first tweet, directly said that the design is “So sexist”. She asked why the only female in the house is doing domestic work while everyone else seems to be chilling/working.

Later she deleted the tweet and posted another one saying “The task of a woman even in a hypothetical “movie house” is to cook ? When will gender roles die ? Sigh”.

Comment your views on the caption posted by the actress !!

Legal Actions To Be Initiated Against Doctor Sharmika??

For the kind statements she has been making in public forums lately, possibilities to take legal actions against Doctor Sharmika are there, said Doctor...

Former Bigg Boss contestant Nithya, wife of comedy actor "Thaadi" Balaji, in an interaction with a news channel, has said that Kamal Haasan is...