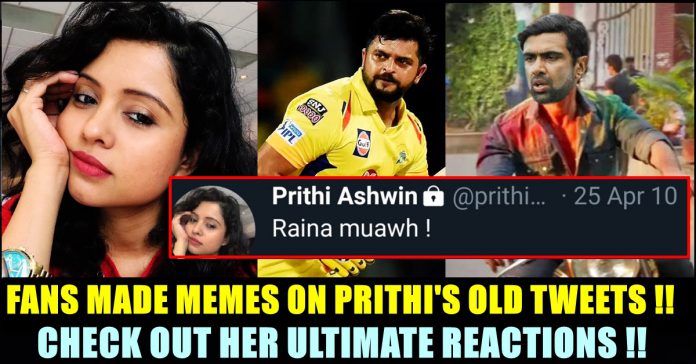 Users of Twitter started exposing the oldest tweets of Prithi Ashwin, wife of the Tamil nadu based Indian off spinner Ravichandran Ashwin. The tweets from year 2010 showed her admiring Suresh Raina, former Indian cricketer. As soon as it went viral across the Internet, Prithi locked her Twitter profile and reacted to them in a most hilarious way for which she is widely known for. Her light hearted tweets during the India-Australia test series has a separate fan base and they tickled the laughing bones of many of her followers and the fans of Indian cricket team.

Prithi Ashwin who was pretty much active in the micro blogging social media site during India’s tour in Australia, was engaging her followers with tweets filled with love for team India with a pinch of humour in it. A tweet she posted after Ashwin’s fighting knock in the third test went insanely viral as she revealed how her husband struggled in the morning of day 5. She also wrote a detailed article for Indian express narrating her inner emotions during Ash’s heroic innings. The article garnered humongous amount of positive response as well.

Lately, she appeared in an interaction with her husband for his youtube channel “Ravichandran Ashwin” and conversed about their personal and professional life. The video is currently trending in youtube with 6 lakh plus views and 25k plus likes. Meanwhile, a number twitter users started digging the oldest tweets of Prithi Ashwin which were uploaded before her marriage.

A twitter user went on to create a meme based on a tweet Prithi uploaded about her admiration towards Suresh Raina. “Raina muawh !”, “desperately searching for the picture I took with Raina” read the tweets of Prithi which were posted on 25th April 2010. The twitter user morphed Shahid Kapoor’s face with Ashwin’s from “Kabir Singh” film to make a meme.

The tweet went insanely viral and made Prithi to lock her profile. However, Mrs. Ashwin didn’t keep mum on seeing these tweets and made extreme fun out of it in her own way. “Self-damage is the best damage” read the first tweet of Prithi regarding people digging her old tweets.

A follower of her advised her to log twitter out for a couple of days as many started started digging her old tweets and said that she could have posted those tweets after a giving a thought.

Replying to him , Prithi said that life changes every 8 year as “Thalaivar” said and they (trollers) could have spared her old tweets as 10 years were gone. She referred to the popular “Ra Ra Ramayya” song from Rajinikanth’s 1996 blockbuster “Baasha” through her tweet. “Thalaivar said life changes every 8years. Inga 10 aachu, konjam vitturkalaam.”

Another user asked whether she was single at that time and Prithi said that it doesn’t matter at all. When a follower said that “Love will win”, Prithi replied that she believes the same.

Ashwin and Prithi were friends from childhood and they got married to each other on November 13 of 2011. On 11 July 2015 the couple became parents of a baby girl named Akhira. Their second daughter Aadhya was born on 21 December 2016. Comment your views on these hilarious reactions of Prithi Ashwin !!