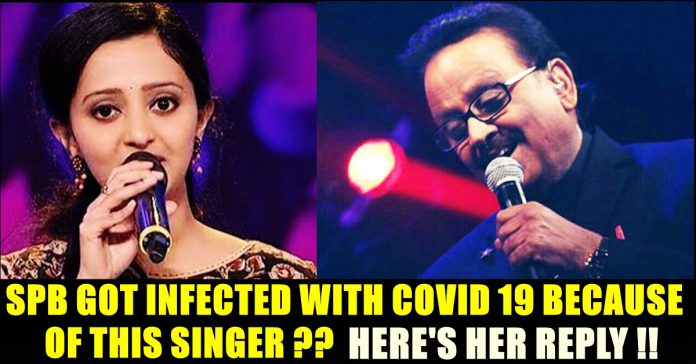 On 20th of August, entire film fraternity prayed for the recovery of the legendary playback singer SP Balasubramaniam who got infected with the COVID 19 virus on 5th of August. Last evening SP Charan, son of the legendary singer updated the health state of his father and thanked everyone who prayed for his father’s well being. He said that it gives him the positive hope.

In the meanwhile a news is being circulated in social media saying that Telugu based Singer Malavika is the one who caused the disease to the legendary singer. It is widely believed that SP Balasubramaniyam affected with the virus after participating in a TV show for a Telugu channel.

For past couple of days, anews has been doing rounds saying that playback singer Malavika attended the despite of knowing that she is a COVID 19 positive. To clear the air, The singer has came up with a clarifications through her official social media handles.

In the Facebook post she uploaded, Malavika said that she got tested for the virus only after SP Balasubramaniam got admitted to a private hospital in Chennai. Her COVID 19 results which came on 8th of August showed positive. Along with Malavika, her father, mother and two year old daughter also tested positive for the virus.

Watch the video she uploaded below :

The female playback singer also said that she has filed a complaint with the Cyber crime to take action against the culprits who started spreading the rumour. “SPBalu Garu’s episode was shot on July 30th with many singers like Hemachandra, Anudeep, Pranavi and Lipsika and on 31st with Karunya, Damini, Satya Yamini, Vasa Pavani and Malavika. I happen to be one of the 4 female singers on the second day of the shoot. Had I been positive I could have easily passed it on to the 3 other female singers or the anchor with whom I shared the makeup room.” the singer said in her post who also added a video.

Malavika said that she has been talking a intense care of not getting infected by the virus for past 5 months. She said that participating in the TV show was the first time she stepped out of her home with a shield inside her car between her driver and her.

“As I heard news of some members of crew and SPBalu garu testing positive on 5th August, I got myself tested and got the report on 8th. I am attaching the report for your reference. As a safety precaution I got everyone at home tested after I got my positive report and unfortunately my father,my mother and my daughter tested positive while my husband tested negative. My driver tested negative too.” Malavika said who updated that her father got admitted in the hospital.

The legendary singer is now on ventilator and ECMO (Extracorporeal Membrane Oxygenation) support. The entire country is praying for his recovery.

Controversial filmmaker Ram Gopal Varma who also enjoys a reputation among the Indian cinema fans through his works, uploaded a tweet, boldly saying that...

Cricketer Dinesh Karthik Fell In Love With This Film Of Vijay Sethupathi !! He Recommends Other Players As Well !!

Krishna Kumar Dinesh Karthik  is an Indian wicketkeeper-batsman who made his debut for the Indian cricket team in 2004 and has been a regular member of...