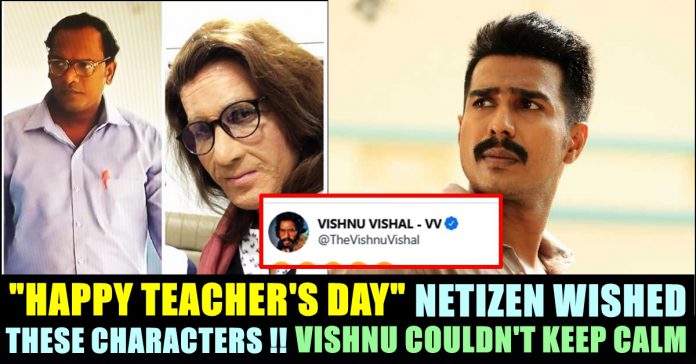 Teachers’ Day is dedicated to our teachers, mentors and gurus who guide us to be learned students and better human beings. Every year, Teacher’s Day is celebrated on September 5, the birth anniversary of Dr Sarvepalli Radhakrishnan, an exemplary teacher and former President of India. People in social media are wishing their favourite teachers by mentioning them in Internet.

Meanwhile, unlike others, one of an Internet user, wished Teachers day wishes to the characters of recent blockbuster movie Ratchasan. The characters which had intense negative shades of Teachers, horrified the viewers who watched the movie in Theatre.

Many Twitter users reacted to this post and few expressed their disappointment as they felt Teacher’s day is not supposed to be treated this way.

It's a disgusting post..not all teachers are like these movie characters..there are many real gems..and teacher's day is about celebrating and thanking such inspirational teachers #HappyTeachersDay

Vishnu Vishal is an Indian film actor and producer who has appears in Tamil language films. He started his acting career in the year 2009 playing the lead role in the sports film Vennila Kabadi Kuzhu, winning acclaim for his portrayal. Vishnu won further acclaim for his role in Neerparavai, portraying a fisherman. He rose to fame with the psychological thriller film, Ratsasan.

On the work front, Vishnu Vishal’s new film FIR has commenced yesterday with an auspicious pooja event. Touted to be an action thriller, FIR in the film stands for Faizal, Ibrahim, and Raiz. To be bankrolled by Anand Joy’s Sujataa Entertainment and directed by Manu Anand, Manjima Mohan has been paired opposite Vishnu in the film, while Rebba Monica and Raiza Wilson of Pyaar Prema Kadhal fame will also be seen playing pivotal characters.

Previous articleReal Reason Behind The Postpone Of ENPT Revealed !! SHOCKING !!
Next articleGautham Menon Revealed Why Vijay & Ajith Refused To Do “Kaaka Kaaka” After All These Years !! WATCH VIDEO !!