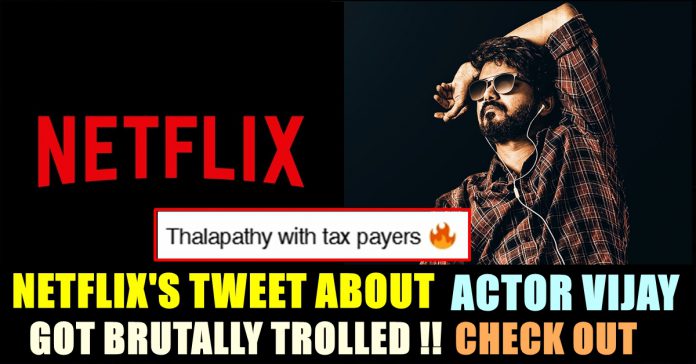 The official twitter account of Netflix India is very much known for its humorous tweets and replies to its followers. In order to make people watch Indian movies on their streaming platform, Netflix would try to grab audience by tweeting about the film in an innovative way. Recent tweet of their official handle about actor Vijay’s viral selfie from Neyveli is going viral among the fans of the actor.

Actor Vijay literally caused a storm in Internet by uploading the selfie he took with his fans in Neyveli recently. Since the incident took place, pictures and videos of the actor waving his hands towards his fans did rounds in social media. The actor who climbed onto a van to meet his fans unexpectedly took selfie with them in his phone.

As soon as the picture released, hashtags such as #ThalapathyVijaySelfie, #ThalapathySelfie, #Neyveli, #Verithanam started trending in the micro blogging social media sites. To our surprise, along with the fans, celebrities also started sharing the selfie picture with appropriate captions. Now Netflix also joined them to celebrate the selfie of the actor by saying that it deserves best picture award.

As the event of Oscar awards is trending in Internet, Netflix wrote “This photograph deserves a Best Picture award!” by sharing the selfie of actor Vijay. Check out the tweet here :

However, this tweet of Netflix didn’t go well among few Netizens who started trolling actor Vijay by associating him with the recent I-T raid controversy. Check out some of the reactions this post received :

In most corrupt Actor category

yes along with some income tax officers 😂 😂

And a tax evasion notice too. https://t.co/Adtll5Qwfc

Previous articleVijay Sethupathi Got Extremely Angry On The I-T Raid Controversy Of Vijay !!
Next articleCORONAVIRUS Effect : Man Killed Himself Due To Miscommunication !!

If he played with a strike rate of just 100 in the 10 balls he faced, Chennai Super Kings would have easily won the...

Priya Anand’s Bold Statement About Acting In These Kind Of Advertisements !!

Priya Anand's latest statement on acting in fairness cream advertisements has won the hearts of netizens. The actress has said that she won't act...