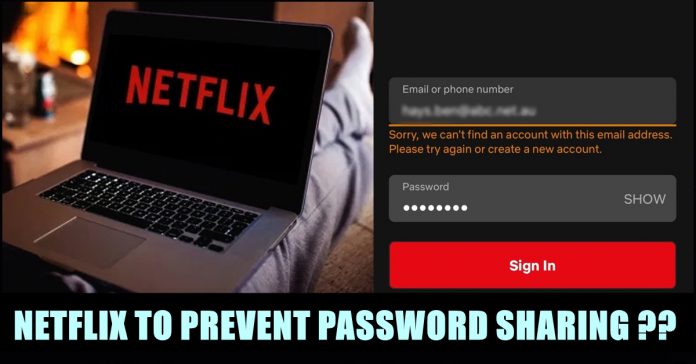 It is common that everyone who are using a Netflix through subscription are not using their account alone. Friends and Family members of that particular person would love to have the “password” of him, to use the platform without paying money. But having multiple users for a single account is going to be a thing of past, as Netflix started to plan on having an eye on the password sharer’s account in near future.

The subject of multiple people using a same account came up to the attention of the authorities during Netflix’s quarterly earnings call, where they determined it as an issue that the company is aware of. To the password-borrowers surprise, Netflix, however has no idea on how to stop the account sharing.

Product chief of Netflix, Greg Peters while explaining about the issue said “We continue to monitor password sharing. We’ll continue to look at the situation and we’ll see those consumer-friendly ways to push on the edge of that, but we’ve got no big plans at this point in time in terms of doing something different there.”

Netflix wouldn’t be the first company to take action regadring the password sharings. Last month, Spotify, a European media-services provider founded in 2006, announced that it would be checking in on the location data to make sure that family accounts are not being shared.

According to research company Magid, around nine per cent of users share passwords for streaming services. Worryingly, that number gets larger the younger the users get with just 13 per cent of Baby Boomers, compared to 19 per cent of Generation X and 35 per cent of millennials.

Even looking at the smaller overall figure, nine per cent of 137 million Netflix accounts is still a lot of potentially lost revenue. No wonder the company is looking at the problem, even if it’s in a somewhat abstract sense for the time being. Not only Netflix, even Amazon Prime video, Hotstar and HBO are facing the same issues.

However, it is now clear that Netflix has no idea on preventing the password-borrowers from using their platform for free in near future. But it is high time for them to look for alternatives as Netflix is visibly aware of their activities.

Among the many kind of reactions that are surfacing post the release of "Vikram", a set of people are trolling the journalists of "Valaipechu"...