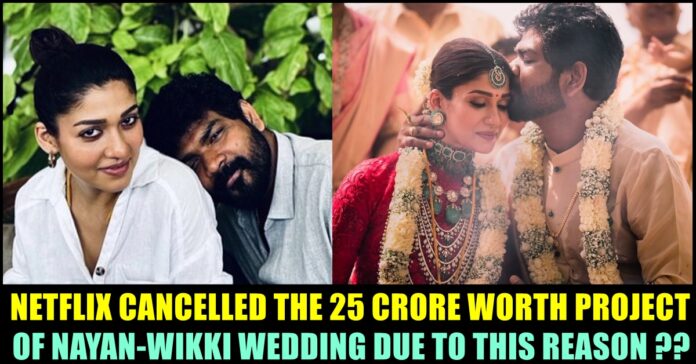 Netflix Cancelled Vignesh Shivan-Nayanthara Marriage Project Due To This Reason ??

Reports on Netflix streaming platform cancelling the telecast of Vignesh Shivan and Nayanthara’s marriage are emerging in prominent media portals. Initially, it was said that Netflix paid Rs. 25 crore to stream the marriage event of the filmmaker-actress duo and backed off from the agreement due to pictures released by Vignesh Shivan in his official Instagram handle during his first month marriage anniversary. The pictures included top celebrities such as Shah Rukh Khan, Rajinikanth, Suriya, Vijay Sethupathi, Anirudh and others.

Kollywood’s most loved couple Nayanthara and Vignesh Shivan got married on 9th of June in an intimate ceremony that was scheduled to take place in a resort in Mahabalipuram, Chennai. The couple who were planning to conduct the important event of their life in Thirupathi temple, couldn’t do it due to practical difficulties. Reports suggested that many prominent celebrities including chief minister MK Stalin, Superstar Rajinikanth, Academy award winning musician A.R Rahman were invited for the event along with 200 other celebrities excluding the close friends of the couple.

A number of reports emerged saying that there are restrictions imposed for the visitors of the Wikki-Nayan marriage due to the streaming rights were sold to Netflix platform. One of the important restriction for the visitors of the event is not to use cell phone or click pictures of the ceremony. Ever since the announcement of Wikki-Nayanthara marriage surfaced, a report on the couple selling the streaming rights of their marriage event to famous OTT platform Netflix was doing rounds. Various reports mentioned various amounts as the price fixed by the celebrity couple. Reports said that director Gautham Vasudev Menon was asked by Netflix to take over the shooting of the event.

However, now, reports emerged saying that the agreement got cancelled after director Vignesh Shivan shared some of the important pictures of his marriage event in the first month anniversary. Check out the posts shared by Wikki below :

According to News 18, Netflix backed out from its commitment after the “Naanum Rowdy Thaan” maker shared the above pictures in his Instagram handle. Through the turn of events, the 25 crore rupees project between the celebrity couple and streaming platform got cancelled. The report of News 18 also says that the whole marriage expense of Vignesh Shivan and Nayanthara was taken care of Netflix.

The expenses, reportedly included rooms for guests at a 5 star hotel in Mahabalipuram, a big glass palace that was erected for the event, Rs. 3500 meal per plate, expensive make up artists and security guards from Mumbai etc.

Vignesh Shivan debuted to Tamil film industry through Simbu’s “Podaa Podee”. The filmmaker developed a romantic relationship with Nayanthara during the making of his second film “Naanum Rowdy Dhaan”. After the success of Naanum Rowdy Dhaan, Vignesh Shivan directed actor Suriya in “Thaana Serntha Kootam”. He also started a production house with Nayanthara and named it as “Rowdy Pictures” with which he and Nayanthara produced “Nettri Kann” by having the latter in the lead role. Some other films such as “Rocky”, “Koozhangal” were also bagged by the production house which is also making a film with Bigg Boss fame Kavin named “Oor Kuruvi”.

The “NRD” maker and the lead lady of the film are in a love relationship for more than 7 years and fans, media never missed to question them about their marriage whenever the duo appears together in public events or in Wikki’s Instagram posts where he often uploads the picture of himself posing with the seasoned actress. Now, as the couple got married now, fans of them are little disappointed as they couldn’t witness the magical moment of the director tying knot to the love of his life.

On the work front, Nayanthara is all set to be seen in “Gold”, “God father”, “Connect” etc and Vignesh Shivan is busy preparing himself for one of the upcoming projects of actor Ajith kumar.

Srimathi's mother Selvi, in a recent interaction with a television channel, has revealed that her daughter was an ardent fan of actor Vijay and...