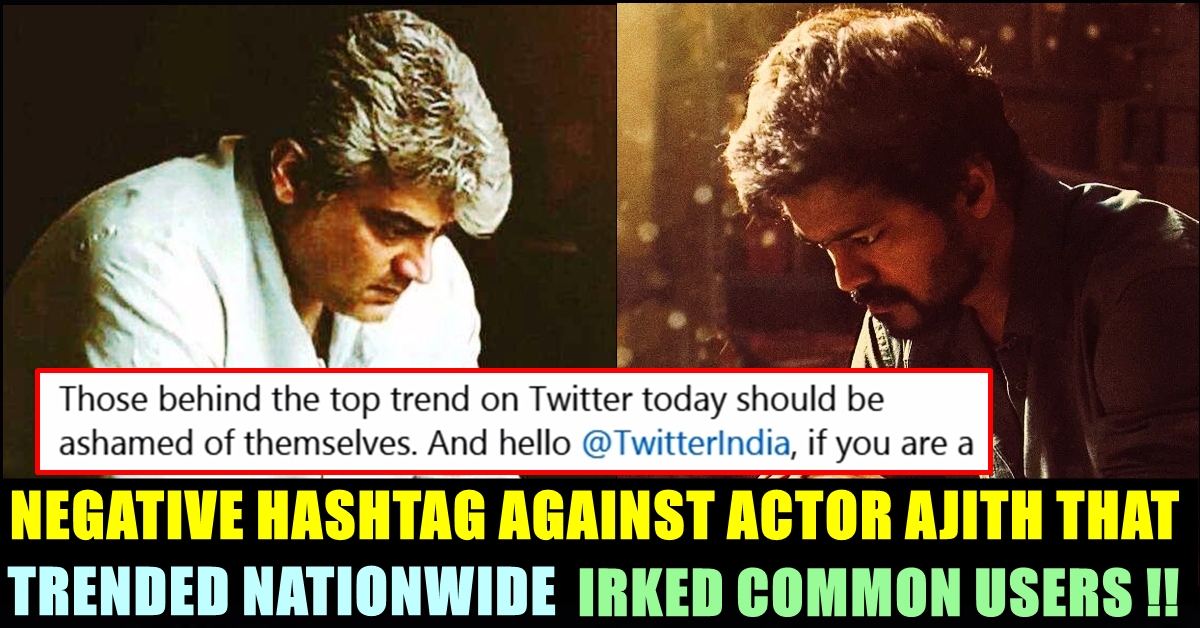 On Tuesday evening, Tamil speaking Internet users who are identifying themselves as a fan of actor Vijay, trended a negative hashtag against actor Ajith in Twitter and the disgusting act irked the general users of the social media platform and embarrassed them. Verbal spats that are taking place between actors are common in social media platforms but this immature act of making the tag trend at the top spot made many people to slam the particular group of fans. They also questioned Twitter on how they allowed such tag to trend at the top.

Ajith kumar who is considered as a rival of actor Vijay since mid 2000s, has a strong friendship with the “Gilli” actor since early 90s. They both acted together in a movie named as “Rajavin Parvayile” and their friendship became evident in certain occasions. Recently, in “Master” audio launch, Vijay said that he got inspired from his friend Ajith and wore suit for the first time for an event.

Ajith who is known for his screen presence, impressed his fans with his off screen personality. Meanwhile Actor Vijay is known for his exceptional dancing skill and for his special ability of attracting kids effortlessly. Though the duo share a special bonding between themselves, fans of both of them are spewing hatred at each other since very long time.

On seeing the negative hashtag they trended against actor Ajith, journalist Dhanya Rajendran wrote “Those behind the top trend on Twitter today should be ashamed of themselves. And hello @TwitterIndia, if you are a woman friendly space, how is this hashtag even allowed? And that too top trend” whereas the owner of Ram Muthuram cinemas said “Enjoy the victory rather than spreading negativity !! Trend page is awful whomever did this doesn’t even obey their idol’s word. Please avoid personal abuse”

Seriously. These groups, do it all the time

Those behind the top trend on Twitter today should be ashamed of themselves. And hello @TwitterIndia, if you are a woman friendly space, how is this hashtag even allowed? And that too top trend

Enjoy the victory rather than spreading negativity !!
Trend page is awfull whomever did this doesn't even obey their idol's word.
Please avoid personal abuse 🙏🏻

This is not the first time such hashtag is trending at top nationwide on behalf of the Tamil fans and it is high time for the fans of both the actors to act wisely as an hashtag which is being trended by just a few hundreds of fans gets humiliation for an entire state.

“Most Irritating Face In The World” – Follower !! Bigg Boss Julie Replied
“I Looked Less Attractive & He Couldn’t Do Romance With Me” – Suriya’s Heroine