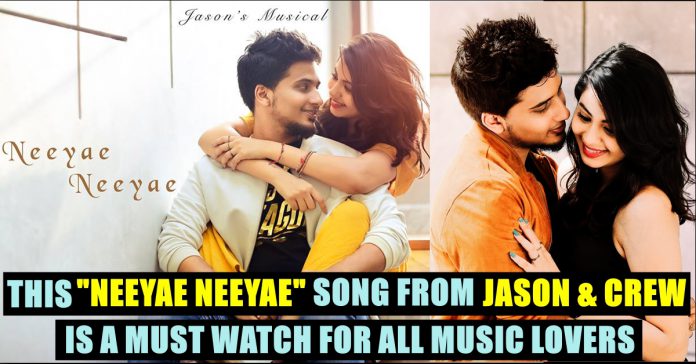 “Neeyae Neeyae” Song From Jason & Crew Is Just Soul Stirring !! MUST WATCH For All Music Lovers !!

The heat is on and the world is going restless over the ongoing IPL season. On the other hand, some are busy in enjoying their precious time with their loved ones, but before all the season of celebration begins, Namma Chennai paiyyan Jason Gagarin is going to give us a relaxing weekend with his new single called Neeyae Neeyae, featuring Monica Chinnakotla in the lead.

Jason Gagarin is the lead singer and composer of his band Groove Tamizh. He grew up listening to Michael jackson and was inclined towards pop music at a very young age. He decided to take the road less traveled and ventured into Tamil pop music despite his busy schedule. Neeyae Neeyae opens with dreamy vocals by Jason along with his band members in a pub set up.

Chris Jason a well-known guitarist in the tamil film industry along with Anderson William did a spectacular job of evoking love and longing with their effortless transition into the background score. The music is plain and simple, reaches straight to the heart and makes you feel the pain of love.

The lyrics capture the most painful type of love: one that’s so nearly right but left to feel wrong. Can there be anything worse than ‘a half-hearted love that will never be whole’? There’s nothing worse than seeing your ex-lover moving on with another person while you are still in the healing process.

A painful ending of a cherished relationship can often become the catalyst of change for any person. This song is about awakening of the heart where one has unknowingly left a lasting pain in the person they once loved only to realize much later that to let go of someone doesn’t mean you have to stop loving, it only means that you allow that person to find their own happiness without expecting them to come back.
The beautiful thing about this song is that it describes a breakup with sensitivity and without blame.

Watch and listen to the song here with headset on :

A tip for our viewers is listen to it when you want to indulge your emotions – and then move on.

Previous articleVignesh Shivan Getting Trolled For His Reply To Siddharth !! Check Out Why !!
Next articleAshwin Ravichandran’s Wife Reacts To The Trolls & Critics On Her Husband !!