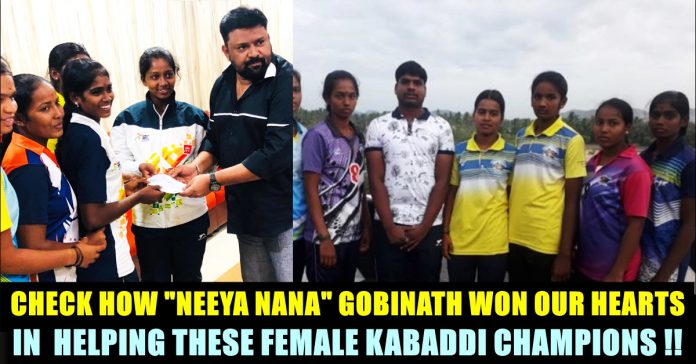 ‘Education for all’ is one of the major tasks being carried out by the Indian government but still we have the lowest female literacy rate in Asia. India is working but the pace is slow as we haven’t achieved what we should have been so far.

Women education is a big opportunity for India to be developed socially and economically. Educated women are the weapon who yield positive impact on the Indian society through their contribution at home and professional fields. Now, In a way of reiterating these facts, “Neeya Naana” fame Gobinath has exhibited a kind gesture by helping female students who are struggling financially. Through Hindu Tamizh‘s Aramm Pazhagu, Gobinath came to know about these 7 champion ladies from Vellore who are excelling in Kabaddi game with the help of their Coach and former Kabaddi player Sanjay Gandhi. Divya, Sathyavaani, Tamizhazhagi, Ashwini, Sowmiya, Gayathri, Monisha are players who are willing to continue their higher studies.

On reading about their struggles through Aramm Pazhagu, “Neeya Naana” Gobinath came forward to help them financially by accepting to pay the 1 year expense of their higher studies. Gobinath provided the cheque of Rs.58,000 to the students in person by making his presence in the Vels university where the students are going to study. Delighted Sanjay Gandhi, shared about the gesture of Gobinath with gratitude. “College management provided us 10 seats. They offered free hostel and food for the students on seeing their athletic skills. With the consent of their parents, 3 more students along with the 7 students were joined the college successfully. Lakshmi madam from Women congress helped us” he said. “Few days after the news published in Hindu, we received phone call from Gobinath sir. I told him about the seats in Vels university. Immediately he asked us to come to the college. I went with the students with little bit of believability to the college. He came and gave us a single cheque for Rs.58,000 which is the fees amount for 1 year” Sanjay added. “When I thanked Gobi sir with gratitude, he said that he came forward only through reading the news in Hindu. He asked the students to study well and stated that it will make many people proud and went” added sanjay who thanked “Hindu” wholeheartedly for publishing the news.

“Thank you so much ka. We will meet you with medal in future for sure” said National Kabaddi player and student Divya to the reporter of Hindu Tamizh Thisai.

Previous articleOnline Users Thrashed Chinmayi For Saravanan’s Termination !! Check Her Reply To Them !!
Next articleWhy Cheran’s Question As “Rajinikanth” To Kamal Was Not Telecasted ?? REVEALED !!

JUST IN : First Post Of Sakshi Agarwal After Coming Out Of BIGG BOSS SHOW !! WATCH VIDEO !!

Bigg Boss show is one of the most watched program as far as reality television shows are concerned. Being started with 16 contestants, the...

After a very long time actress Nayanthara has appeared in a public function. Zee family conducted its first ever award function and named it...