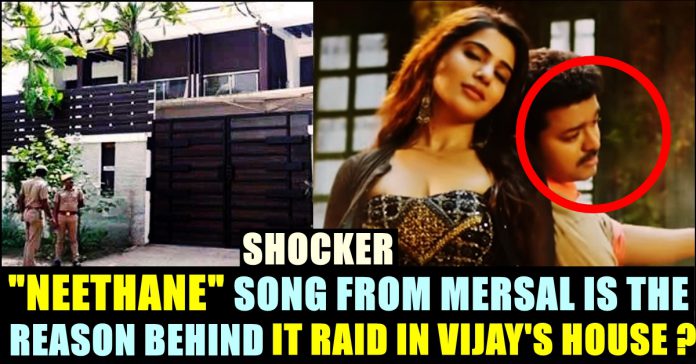 “Neethane” Song Is The Main Reason Behind IT Raid In Vijay’s House ?? WATCH

Officials of Income tax department inquired actor Vijay in the shooting spot of director Lokesh Kanagaraj’s “Master”. The film which is going on floors at the coal mine in the Neyveli Lignite corporation, stopped due to the visit of Income Tax officers who breached into the spot to inquire actor Vijay. According to reports, the actor is currently being questioned by the officers.

IT department officers who took away Vijay for questioning from the shooting spot, issued him a summon. Due to this unexpected visit, the shooting for the day was cancelled and is expected to resume after the inquiry. Reports suggests that IT Raid is taking place since Wednesday morning to inquire about the properties associated with AGS Entertainments and financier Anbu Chezhiyan. So far Income Tax department officers has found Rs.77 Crores during raids on the powerful financier in the Tamil film industry, according to NDTV.

The properties of AGS Cinemas and film financier Anbu Chezhiyan were searched and actor Vijay was questioned in the sets of “Master” regarding an alleged tax evasion case. The home which belongs to Vijay in Chennai was searched on Wednesday.

“The counting is still going on and the total seizures is likely to go up.” an official said to the media who informed that their probe revealed unaccounted transactions between financier Anbu Chezhiyan and actor Vijay after which the actor’s home on East Coast Road outside Chennai was raided. The questioning continued today, according to reports.

This news of Income tax ride in actor Vijay’s house has instigated a big time debate among several set of people. While the fans of the actor are defending their idol, people also criticizing the entire film industry for being an industry which involves in tax evasion often. Now in a debate conducted by News 18 channel, a lawyer named as Uma Shankar who took part in the show has stated a bizarre reason for the IT raid in Vijay’s house.

He said that the ringtone of Vijay’s “Neethane” song from his movie “Mersal” has interrupted Superstar Rajinikanth while he was giving his speech to the press reporters about the importance of Citizenship Amendment Act. The Lawyer said that it made him angry and the central government which backs the decisions of Rajinikanth, sent a bunch of officials to the house of Vijay for IT raid.

Though the lawyer said it in a sarcastic tone to mock the reporter who tried to connect the two incidents of Rajinikanth and Vijay involving the Income Tax department, his joke didn’t go well with the netizens as they started believing that he is stating it as a real reason.

In the full video uploaded by the News 18 youtube channel, Uma Shankar can seen defending the I-T officials act of withdrawing all the proceeding against Rajinikanth for alleged concealment of income. “There were 1072 cases withdrew by the I-T officials which was published in newspaper on October 2019 but Rajinikanth case alone grabbed the limelight” said Uma shankar in the debate.

Watch the full video of the debate here :

Ahead of the release of director Rathna kumar's third film "Gulu Gulu", music composer Santhosh Narayanan came up with a tweet in his official...