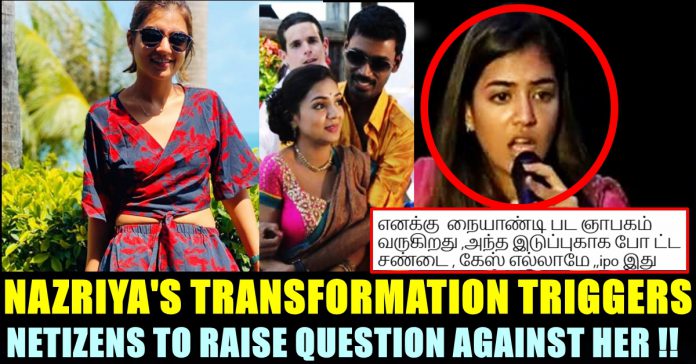 After marrying to Malayalam actor Fahad Fazil, Nazriya took a break from her film career and made her come back through Anjali menon’s Koode. Fans who got disappointed with the actress getting married expressed their emotions in social media platforms. During her prime time of her acting career, Nazriya acted in a film called “Naiyandi” with Dhanush. The actress made a complaint against the “Naiyandi” team for using dupe for her character as she denied to act in an intimate scene.

It made a huge controversy and the actress conducted press meets to provide clarifications. In the press meet Nazriya said that she filed complaint to make the director to arrange a screening for her. After watching the film, Nazriya said that there are no such body doubles used as it was used in trailer.

Now the actress, who made a come back is all set to appear in a movie named as “Trance” along with her husband. Ahead of the film, few pictures of the actress released which triggered the Tamil netizens to question the actress about the “Naiyandi issue”.

Check out the recent pictures that got surfaced in internet below :

Tamil cinema fans who saw these pictures of the actress asked why she made trouble during the release of Dhanush’s “Naiyandi” movie. Few even accused the actress by saying that she promoted the film by creating controversy.

Pic reminds me of Naiyandi issues

However, the actress who doesn’t seem to care for these comments, is constantly sharing the happy pictures of her in her official Instagram account. Check out some of her recent posts below:

Comment your views on the comments received by the actress !!

Mannargudi MLA Dr. T.R.B Rajaa and finance minister Dr. P.T Raajan reacted to a hilarious troll that was made as a reply to a...