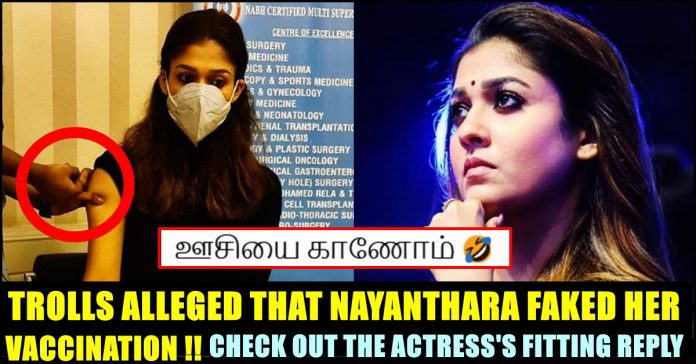 Nayanthara’s Fitting Reply To Trolls Which Said That She Faked Her Vaccination !!

After the pictures of Nayanthara getting vaccinated surfaced in Internet, a set of social media users came up with reactions wondering whether she actually got injected by the nurse or not. As the syringe was not visible in the picture that did rounds across the social media platforms, netizens trolled the actress saying that it could be a stunt to make people get vaccinated. As a result, an official clarification from the team of the actress was released with a new picture in which we could see the nurse injecting Nayanthara with a syringe in her hand.

On Tuesday, Nayanthara and her boy friend Vignesh Shivan received their first dose of the COVID 19 vaccine. The filmmaker took to Instagram and shared the pictures of himself and his would-be getting injected and urged his followers to do the same to prevent themselves from getting infected with the deadly virus. “Please please get vaccinated, Stay safe , stay indoors. this too shall pass. idhuvum Kadandhu Pogum 😔” he wrote in his caption.

As soon as the pictures were released, various kind of reactions flooded in social media. Few questioned why the actress is getting injected in right arm when others were suggested to get injected in left arm. Many even believed that the nurse who was injecting Nayanthara was not holding a syringe and is pretending like injecting for photographs. Several memes, trolls and comments were posted by the users of the social network.

Photo-op-க்காக பண்ணினாலும் சரியாப் பண்ணனும்.
NABH certified hospital, but the nurse isn't wearing gloves , and no self-respecting nurse will administer a vaccine injection in the right arm.

(But she doesn't even have a syringe, so it doesn't matter will be the obvious reply) https://t.co/1iMTpVvWGh

Now, the actress has made an official clarification to clear the air. She released a different picture of herself getting injected and brushed off the rumours. The newly released picture shows the nurse holding an injection and it has been confirmed that the angle of the previous picture made people to think that there was no injection.

Official: Team #Nayanthara clarifies that there is indeed an injection/syringe in the Covid Vaccine pic.. pic.twitter.com/C7TNvKIPcB

On the work front, the actress who was last seen in “Nizhal”, is expected to be seen in her fiance’s “Kaathu Vaakula Rendu Kaadhal”, “Nettri Kann”, “Annaththe” etc. Being one of the very few actresses who sustained in the industry for 15 long years as a lead lady, Nayanthara is fondly dubbed as “Lady Super Star” by her fans. This reply from her regarding the vaccination made her fans extremely happy which is evident through their posts and reply comments in the social media platforms.

Previous articleMadhavan Got Emotional After Watching This Video Of A Nurse !!
Next articleDavid Warner Expressed His Admiration Towards Dhanush !! Fans Can’t Keep Calm

We have seen posts in social media platforms here and there saying that earth is healing from the harm we done to it for...

One of the cons of being famous includes being subjected to unnecessary harassment. One of the recent targets of such an issue is Calendar...

Actor Sivakarthikeyan who is currently busy promoting his upcoming film "Don" which is going to get released on 13th of May, responded to a...