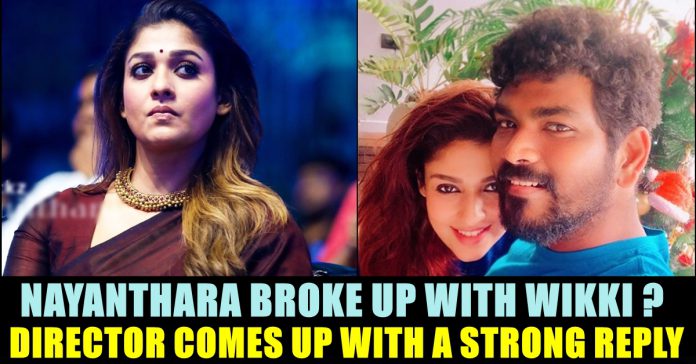 As Nayanthara appeared in the Zee Cine Awards 2020 without Vignesh Shivan, rumours started floating that the couple has parted with each other. After a very long time actress Nayanthara has appeared in a public function. Zee family conducted its first ever award function and named it as Zee Cine Awards 2020. Nayanthara received favourite actress of 2019 award in Zee cine awards 2020. She also received “Sridevi Award for Inspiring Women of Indian Cinema” presented by Boney Kapoor.

As we all know, as far as award functions are concerned, Vignesh Shivan and Nayanthara, the popular celebrity couple would always appear together. The couple who met at the sets of Vignesh Shivan’s second directorial Naanum Rowdy Dhaan, are dating each other for 5 long years. They have been visiting foreign countries together as a part of their vacation and are pictures of them together would surface in the Instagram timeline of the “Podaa Podi” director.

Now, on seeing the actress alone in the award function, several news portals started spreading news about their break up. Few fans and followers also stated the same which is evident in the social media platforms.

Now in a way of reply to the baseless rumours, director Vignesh Shivan, posted a couple of posts in his official Instagram account in which he enjoys more than 9 lakh followers. The first picture he posted had the picture of Nayanthara posing with a wrapper of a chips packet which says “Miss Vickey’s”

The filmmaker, in the caption wrote “Always & forever”, in a way of making a strong statement. Check out his post below :

In the second post, Vignesh shivan uploaded a selfie picture of himself with Nayanthara. In the picture Nayanthara was seen wearing the same attire which she wore in the Zee Tamil’s award function which suggests that it was a picture shot on the day of the award ceremony.

This gave a sigh of relief for the fans of the couple. They have been expressing their happiness in the micro blogging social media platform. Check out their reactions below :

This picture is enough to stop all rumours….🙏🙏🙏

Rempa rempa thanks to few shameless media who wrote nonsense abt her…. Only bcz of your articles we've got 2 pics of Nayan now, grateful😍😘🕺💃 #Ladysuperstar #Nayanthara pic.twitter.com/r0Ru6TA7oH

Currently the duo is busy in their debut production venture. Titled as “Nettrikann”, Nayanthara is going to play a role of a blind woman in the film. They named their production house as “Rowdy pictures” and are expected to do many more films with it. Nayanthara is also busy in working for “Mookuthi Amman” which marks RJ Balaji’s debut directorial.

What do you think on this reply from Vignesh Shivan ?? Comment your views below !!

Previous articleAjith Acted In This Movie Of Him Without Belief !! WATCH !!
Next articleOnline User Raised Question After 6 Years For A Dialogue In “Moodar Koodam” !!

The thread made by Coronavirus across the world looks extremely dangerous. The disease started infecting in China and caused several deaths. Now it...