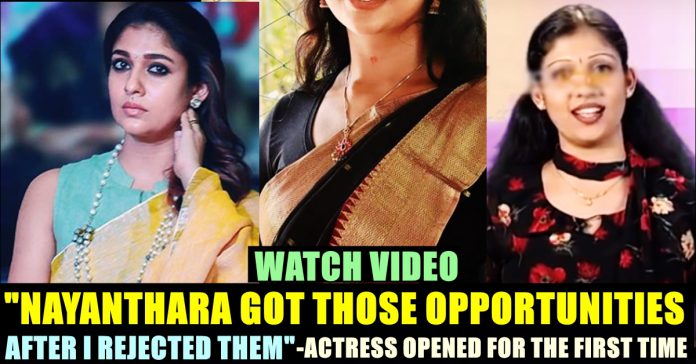 Actress Navya Nayar, in a recent interaction with a popular youtube channel, revealed about rejecting the roles that were played by actress Nayanthara who is currently being considered as one of the most loved heroines of South India. Navya Nair, after starting her career as an actress in Malayalam film industry, debuted to Tamil film industry through director Radha Mohan’s “Azhagiye Theeye” in which she paired with actor Prasanna.

The actress, recently revealed that she was approached by director P. Vaasu to play lead in his block buster film “Chandramukhi” and to play lead in director Hari’s “Aiyya”. Interestingly, both the opportunities was grabbed by Nayanthara who has paired almost with all the top actors of Kollywood film industry after acting in “Aiyyaa” and “Chandramukhi”.

Navya Nair said that her father who was choosing projects for her at that time, was reluctant about herself entering the Tamil film industry. She said that she started doing Tamil films only after her father’s nod. The actress got married to a Mumbai-based businessman, Santhosh Menon, on 21 January 2010, and they have a son Sai Krishna. She was last seen in the Kannada version of blockbuster Malayalam film “Drishyam”.

“Before debuting in “Azhagiye Theeye”, I got lot of opportunities from Tamil film industry but I didn’t do any of it due to my foolishness” Navya Nair said in a lighter note. “I realize now that those decisions of mine were wrong. That doesn’t mean I regret but just a bad feeling” the actress said. “I got opportunities to play female lead in the films of Vikram and Ajith, if I remember it right. My father was reluctant of me entering Tamil film industry and suggested me to concentrate on Malayalam film industry” she added.

“I didn’t reject the film but I couldn’t do it due to my commitments. They say that each and every rice we eat would contain our name. Comparing to rice, a film is bigger” she joked about it. Watch the video below :

After acting in “Ayya”, Nayanthara got the opportunity to pair with Superstar Rajinikanth in “Chandramukhi”. The actress, further paired with several heroes and took a break from film industry after finding herself amidst a number controversies. However, she gave her come back through “Raja Rani” and started her second innings only to gain the tag “Lady Super star”. She was the only South Indian female actor to have made it to the Forbes India Celebrity 100 2018 list, with her total earning credited at ₹ 15.17 crores. She is currently committed to half a dozen of projects and also involved in distributing films with her boyfriend Vignesh Shivan.

The demise of young talent Sushant Singh Rajput made a revolution in Indian film industry, we must say. High profile stars, producers and filmmakers...