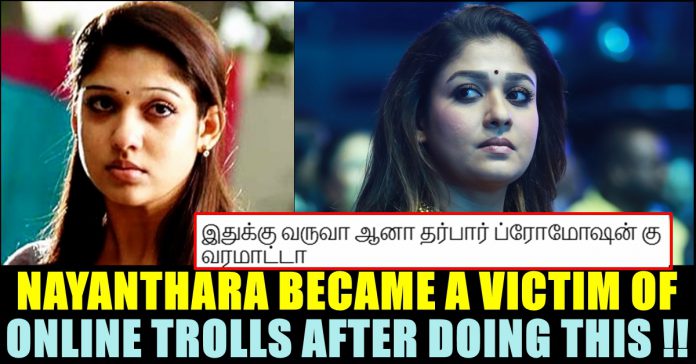 After a very long time actress Nayanthara has appeared in a public function. Zee family conducted its first ever award function and named it as Zee Cine Awards 2020. The juries of the award function are Suhashini Manirathnam, Gautham Vasudev Menon, Bharath Bala, Karu Palaniappan and Bharadwaj Rangan. The channel successfully completed its prestigious award function in the presence of many stars of Kollywood industry.

Awards for Pride of Indian Cinema and Pride of Indian music was received by Kamal Haasan and A.R Rahman respectively. Many more awards under the categories such as Best actor, Best actress, Best music director, Best director, Best editor, Best supporting actor were provided in the award function. Many celebrities including Kamal Haasan and Dhanush took part in the event which made it special and grabbed the attention of the audience. To our surprise, actress Nayanthara who avoided appearing in public functions also took part in Zee cine awards 2020.

Nayanthara is one of the very few female actors who rules Tamil film industry for more than 15 years. Today, she is the highest paid actresses of South Indian film industry. She is also the only actress who manages to act in both female centric movies and hero oriented movies. The surprising fact about it is that the “Bigil” actress shines in both the regions. She avoided appearing in the promotional events of her own movies and to our shock she didn’t take part in Darbar audio launch as well. She didn’t made her appearance in press meet too.

Now after seeing the actress happily participating in the Zee cine awards 2020, many people from micro blogging social media site, especially the fans of Superstar Rajinikanth expressed their disappointment over the actress. They started trolling her for making her appearance only to receive awards. Nayanthara received favourite actress of 2019 award in Zee cine awards 2020. She also received “Sridevi Award for Inspiring Women of Indian Cinema” presented by Boney Kapoor.

What do you think on these comments Nayanthara is receiving ?? comment your views !!

Previous articleAnirudh In Big Trouble For Composing Music For Darbar !!
Next articleVideo Of Suriya Shedding Tears For A Student Goes Viral !!