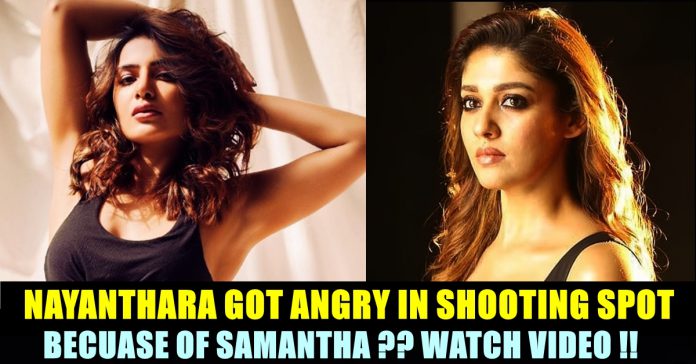 Shooting of the most awaited romantic flick “Kaathu Vaakula Rendu Kaadhal” starring Vijay Sethupathi , Samantha and Nayanthara is on full swing. Makers of the film recently released a single and became a huge hit among the online audience. Now, to our shock, a report on Nayanthara expressing her frustration in the shooting spot of the Vignesh shivan directorial got surfaced in the Internet through the movie journalists of Valaipechu youtube channel.

Nayanthara, a skillful actress who has always been a director’s actress, is currently enjoying a huge fan base. Nayanthara who is fondly called as “Lady Superstar” by her fans, is one of the highest paid actress in Kollywood right now. Having acted in at least 70 films, Nayanthara is currently concentrating in both commercial and critically acclaimed films.

She is one of the very few actresses in India who is constantly acting in female oriented films and excelling in it. Some of the highly appreciated solo films of her are Aramm, Kolamavu Kokila, Imaikka Nodigal etc. She paired with almost all the top tier actors of Kollywood including the new ones such as Sivakarthikeyan and Vijay Sethupathi.

Now, the actress is currently busy acting in a number of films and is also involved in distributing films along with her long time boyfriend Vignesh Shivan through their Rowdy pictures. The duo also concentrating on producing quality films. Now, a report has surfaced saying that Nayanthara, in the sets of “Kaathu Vaakula Redu Kaadhal” has yelled at the crew members of the film to be silent while they were lauding the performance of Samantha, according to Valaipechu.

“The shooting of “Kaathu Vaakula Rendu Kaathal” is currently taking place at Chennai. Vignesh Shivan has been shooting the portions of Samantha and Nayanthara. On seeing the acting skills of actress Samantha, the people who were present at the shooting spot lauded her by clapping hands and making noises.” they said in their video.

“On hearing the loud noise, Nayanthara who was also present at the spot, shouted at the unit members to be silent.” they added. “Samantha seems to have predicted these and refused to accept the project initially, I think” said Bismi, a senior film journalist.

Nayanthara who stopped acting after appearing in “Sri Rama Rajyam”, gave her come back through “Raja Rani” and started her second innings only to gain the tag “Lady Super star”. She was the only South Indian female actor to have made it to the Forbes India Celebrity 100 2018 list, with her total earning credited at ₹ 15.17 crores.

Samantha who was busy acting in Telugu films, is going to be appeared in a Tamil film after “Super Deluxe”. The film’s camera work is going to be done by Vijay Kartik Kannan and Aniruth has been committed as the music composer. Produced by Seven screen studios and Rowdy Pictures, the film is going to be edited by Sreekar Prasad.

Former AIADMK councillor C Jayagopal has been booked after an illegal hoarding claimed the life of a 23-year-old techie in Chennai on Thursday. Acting on...

Video of a traffic police beating a man who identifies himself as doctor is going viral in social media platforms with various kind of...

Suriya starring "Soorarai Pottru" surpassed some of the greatest films that were made in the history of world cinema and grabbed the third spot...