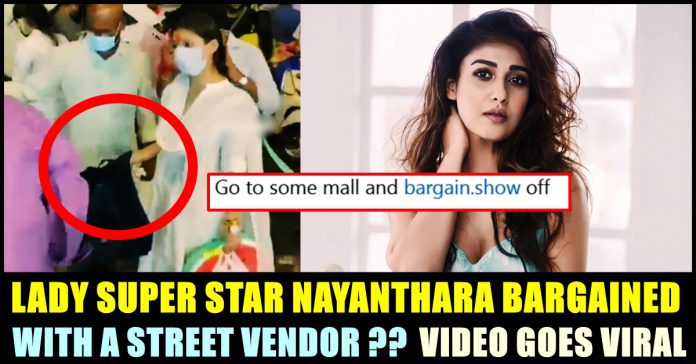 A video claiming that Nayanthara who is fondly called as “Lady Super star”, bargained with a street vendor while buying a bag goes viral in social media platforms. The incident seemingly took place when the actress visited temples at Mumbai with her would-be Vignesh Shivan. In the viral video, the actress who is going make her Bollywood soon could be seen wearing an all white-salwar suit, doing some street shopping.

On Tuesday, Vignesh Shivan uploaded a series of pictures of himself and Nayanthara visiting temples and worshipping God. “Blessings all the way from Shirdi ✅ Mumbadevi ✅ Maha Lakshmi temple ✅
Sidhi vinayak ✅ godbless #dussehra #ayudhapooja #saraswathipooja #blessings” read the caption of his post. Check out his post below :

The post garnered wide reach with the lovely couple grabbing headlines. In the recently surfaced viral video, Nayanthara could be seen wearing the same attire. Being one of highest paid actresses of country India, the actress, in the video, could be seen bargaining about the price or quality of the bag she was holding.

Sharing the video, a social media user, twitter handle name of whom read “Nayanthara FC” wrote “Women Will Be Always Women 💃🙈 The Way She’s Bargaining With The Seller 😍 Ayyoo So Cutiee” on his/her caption. Watch the video below :

#LadySuperstar #Nayanthara One of the top heroines in South Indian Cinema bargaining with the road side shopkeeper who is dependent on his daily wages for a little money. 👍🏽😂

She will know about money value

Go to some mall and https://t.co/0tEx4edNeG off

Nayanthara started her career in a very young age. After acting in “Ayya”, Nayanthara got the opportunity to pair with Superstar Rajinikanth in “Chandramukhi”. The actress, further paired with several heroes and took a break from film industry after finding herself amidst a number controversies. However, she gave her come back through “Raja Rani” and started her second innings only to gain the tag “Lady Super star”.

She was the only South Indian female actor to have made it to the Forbes India Celebrity 100 2018 list, with her total earning credited at ₹ 15.17 crores. She is currently committed to half a dozen of projects and also involved in distributing films with her boyfriend/producing Vignesh Shivan.

Previous articleActor Suriya’s Own Fans Got Upset Over The Star’s Recent Twitter Activity !!
Next articleCase Filed Against Shankar’s Son-in-law In A Minor Girl Sexual Harassment Case !!

It has been officially announced that season 5 of Tamil Bigg Boss is going to be launched from 3rd of October and fans of...

Sri Lanka created history in Port Elizabeth, to become the first Asian team to win a Test series in South Africa. With a comfortable...