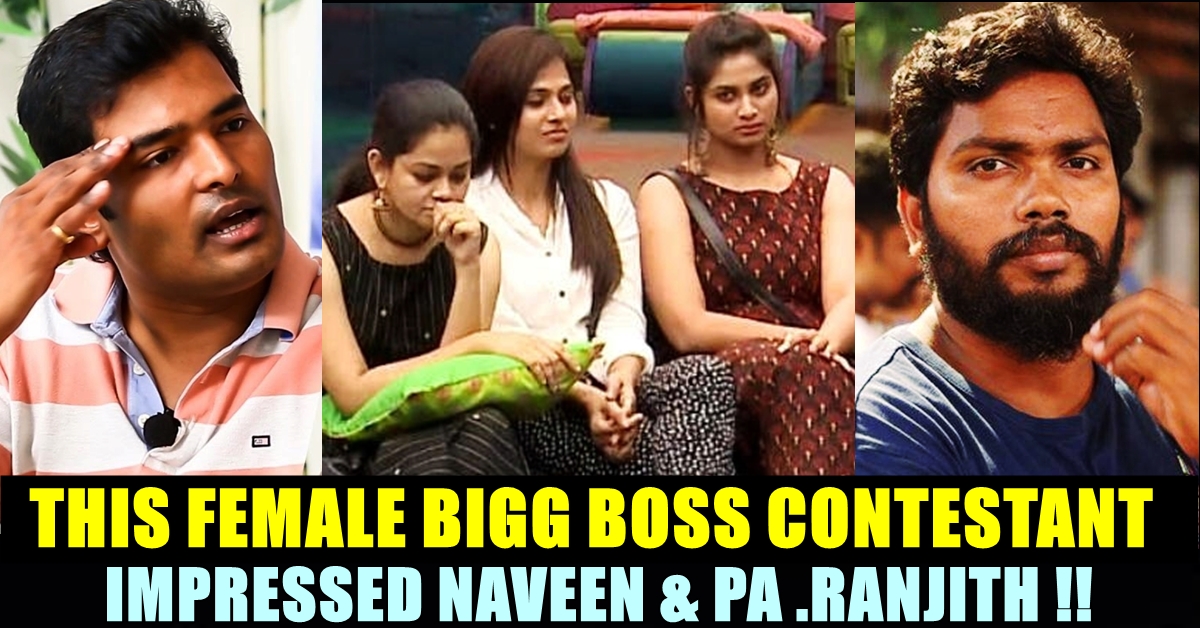 “Moodar koodam” fame Naveen who is currently directing Arun Vijay and Vijay Antony in a film named as “Agni Siragugal”, appreciated Anitha Sampath for her progressive thinking and for her rational ideology. The tweet he posted was liked by director Pa. Ranjith of Kaala, Kabali, Madras and Attakathi. The speech she gave during a task became a subject to a rift between herself and Suresh Chakravarty, oldest contestant of the Bigg Boss house.

On Tuesday’s episode, Anitha went into a bathroom and bursted out in tears, worrying about the way Suresh Chakravarty behaving towards her. Being a journalist, Anitha made a statement in front of other contestants on the ritual which is being followed in Indian culture for a long time.

In the task, participants were asked to contest in a debate and to divide themselves into two teams that represents urban lifestyle is best and rural lifestyle is best. Anitha who said that she will be representing City life, shared the experience she went through in her work space. She said that most people who are living in Chennai city wouldn’t care about other people’s caste. “That’s the beauty of Chennai city. As a girl who grown in a city like Chennai, I am proud to state that point here” Anitha said.

She went on to explain how women who lost their husbands are being discriminated in the rural parts of our country. She referred to how Suresh called her first to do a ritual and asked how would she have felt if she was not a “Sumangali”. Anitha also said that she broke the stereotype by making her mother-in-law who lost her husband recently to do a ritual in her engagement.

This speech from Anitha was lauded by Kamal Haasan in the weekend episode and said that Periyaar would have appreciated her if he was alive. Sharing the video, Naveen of “Moodar Koodam” posted a tweet saying “These kind of women who have progressive thinking, rational ideology and speaks equality are the identity of Tamil nadu”

This tweet was liked by filmmaker Pa. Ranjith who is known for directing Rajinikanth in Kaala and Kabali.

“If Periyar was alive, he would have appreciated you for sure. That’s what he was doing. He did social reforming and I see him as a social reformer.” said Kamal who added that it is the correct stage to talk about it. “If not now, when ?” he asked the contestants who said that Anitha said it in a wrong situation.

Comment your views on Anitha getting this much of support from the most inspiring personalities !!