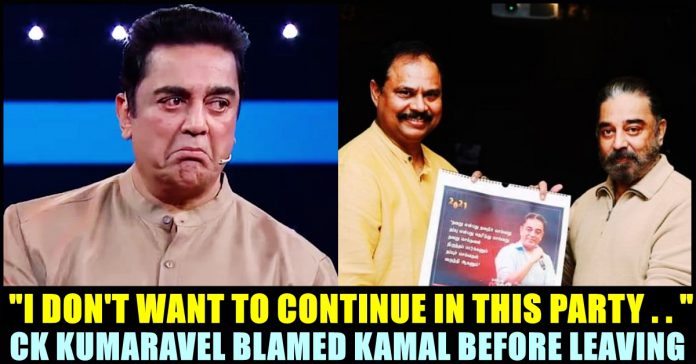 Followed by the prominent members of Kamal Haasan led “Makkal Needhi Maiam” party, CK Kumaravel, Chief executive officer of Naturals released a press note blaming Kamal Haasan for the poor performance of the three year old political party and confirmed his exit from it. He said that the party had the potential of becoming the “party of opposition” in state Tamil nadu and the way Kamal Haasan guided by some of his close accomplices caused the humongous loss.

Today. CK Kumaravel released a press note announcing about his exit from the party. Kumaravel said that he felt the good vibes from public towards the party during the state-wide rally of the actor during November and December. He said that the party getting “Torchlight” symbol and Rajinikanth quitting politics improved his confidence on the victory of the party.

He further questioned why the party couldn’t win one single constituency in the Tamil nadu assembly election despite of having a bright opportunity to become the party of opposition. “Your political consultants and their wrong guidance is the reason. Their narrow minded goal of winning one single constituency in the election led people to lose confidence and expectations on the party” Kumaravel said in his note.

“There is nothing for me to say something new as the party members who left the party earlier stated the appropriate reasons which you know that they are true. I expected us to set history but we are reading history. I wish to travel in a secular-democratic party other than staying in this party which depends on the image of one individual. So , I am immediately removing myself from the party” Kumaravel said in his note and thanked Kamal haasan for the love he showed during his association with the party. “Wishes for you and your party” he concluded his press note.

On 6th of May, Prominent members of Kamal Haasan’s Makkal Needhi Maiam announced that they are resigning from the party. The decision came from the politicians after the party failed to win any of the seats in the Tamil nadu assembly election. Recently Velacherry contender Santhosh Babu IAS and Maduravoyal candidate left the party citing personal reasons as well. Vice President Mahendran, in his press release said that there is no change in the approach of Kamal Haasan in taking the party forward even after the huge loss.

Previous articleTamil Internet Slammed Samantha For The Role She Played In “The Family Man 2” !!
Next articleTamil Actor Took An Indirect Dig At PM By Comparing Him With This Famous Character In “Titanic” !!