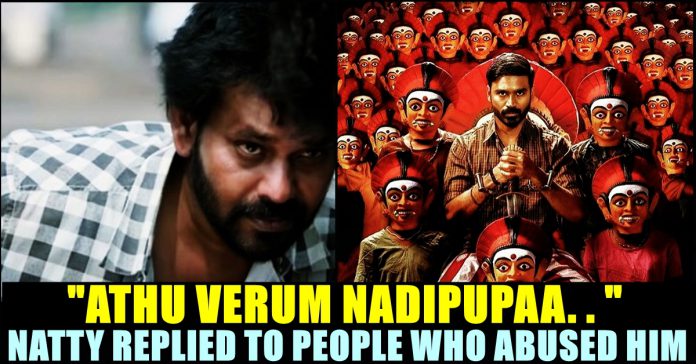 Natty Replied To People Who Abused Him After Watching “Karnan” !!

Natty aka Nataraja Subramaniyam who played the role of an antagonist in the recently released Maari Selvaraj directorial, uploaded a tweet in his official twitter account on the night of Sunday, asking people not to abuse him. The actor was forced to clarify that it’s just an acting and thanked the fans who received the film well.

It has been reported that “Karnan” starring Dhanush got collected Rs. 10. 50 crore on the first day and became the first film of the actor to reach such number on the opening day. Critics are also lauding the film’s intriguing content and the performances of the leads.

. @dhanushkraja 's #Karnan has done well at the Box office all over this opening weekend.. pic.twitter.com/elUhwdmbOq

Karnan’s plot revolves around a fearless youngster fighting against the influential people who are oppressing his people through various ways. The period film which is set in the suburbs of Tirunelveli district, talks about the struggles faced by the people who belong to a small village named “Podiyankulam”.

One of the main problems which acts as a barrier for the growth of “Podiyankulam” residents is the absence of government buses and a bus stop. It is reported that the film is made based on the Manjolai riots of 1999 and 1997 Melavalavu massacre.

With Dhanush playing the titular character, actors such as Lal, Natty, Lakshmi Priya, Sujithra Vijayan, Gouri Kishan played the supporting roles. Natty who is known among mainstream audience for the role he played in “Sathuranga Vettai” as a con artist, appeared as a deadly villain in “Karnan”. Named as “Kannapiran”, Natty came in as a polluted cop who is obsessed with caste pride.

In one of the scenes, he could be seen beating the old men of “Podiyankulam” village for their names. The actor received accolades from the audience and critics for the performance he pulled off. However, a number of people who watched the film seems to have abused the actor personally.

It came to light when Natty himself came up with a tweet on Sunday night asking people not to abuse him. He penned the tweet in a light manner and used the tone of “Vitratheenga eppov” song from the film sung be Dhee. “Don’t abuse me my father, my mother and brother. I have just acted as “Kannapiraan”. Don’t abuse me through phone call and message. I can’t bear. That’s just an acting. Thanks to the fans” he said in his tweet.

The reception Suriya has been receiving after playing a cameo in Kamal Haasan's "Vikram" is immensely positive. In twitter, hashtag "Rolex" is trending with...

Singer Chinmayi Bought A Brand New One Plus Phone & Highly Disappointed With It !! Bashes The Product !!

Chinmayi Sripaada is an Indian playback singer, working mainly for the South Indian film industry. She is also a voice actor, television presenter and radio...