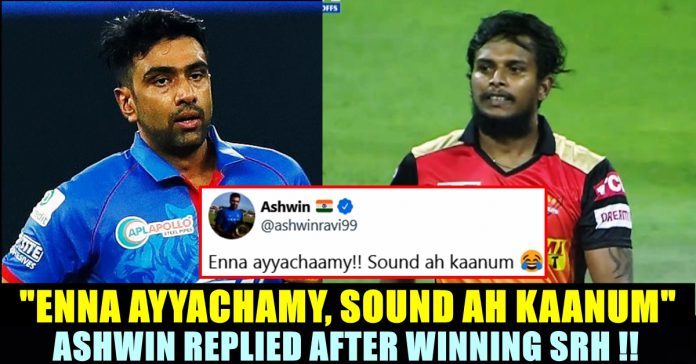 Delhi capitals comprising a bunch of youngsters successfully managed to reach the finals by beating Sunrisers Hyderabad pretty comfortably. Kagiso Rabada’s four wickets and Marcus Stoinis’ three wickets helped the team to defend a total of 189 runs against Sunrisers Hyderabad. Delhi Capitals are reaching the finals for the first time in the history of Indian Premiere League. They are going to meet Mumbai Indians in the finals.

Prior match, Russel Arnold, a former Sri Lankan cricketer of Tamil descent, who played all forms of the game, sent a message to Ravichandran Ashwin of Delhi Capitals. He who is currently involved in doing commentary for the ongoing T20 tournament, said that Natarajan of Sunrisers is going to whack the toe of Ashwin in the Qualifier 2.

As we all know, Natarajan and Ashwin hail from Tamil nadu and the former sees the latter as his senior and showed uttermost respect for him in a live chat conducted for Ravichandran Ashwin youtube channel. However, as they both were supposed to face each other in the knockout game, Russel, supporting Team Sunrisers Hyderabad, wrote “Dei @ashwinravi99 Watch out na … Natarajan gonna whack your toes. Folks tune in to #IPL2020 on the 9th to watch Ash tap dancing” in his tweet.

It is notable that Natarajan became the top bowler as far as the number of yorkers bowled in the entire tournament are concerned. He bowled 63 yorkers so far which is highest by any and the ball he bowled to take AB DE Villers’ wicket was widely appreciated.

Ashwin and Arnold are very much interactive with each other in the micro blogging social media site and their friendly banter has a seperate fanbase. Russel also participated in a live interaction with the Indian off spinner for his youtube channel. Now, after winning the match, Ashwin replied to Arnold in a hilarious way.

Referring to the popular comedy clipping in Vijay-Vadivelu’s Sachin movie, Ashwin wrote “Enna ayyachaamy!! Sound ah kaanum” (What Ayyachamy !!, Cat got your tongue ?) with laughing emojis. Ayyachamy is the character of name of Vadivelu in the romcom.

Here’s the tweet of the West mambalam based cricketer :

This tweet from the spinner garnered huge response from majority of his 1 crore followers who are tamils. Check out some of the reactions below :

He did bowl 6 yorkers in the final over tho 😅

“I Can Go Back & Open A Tea Stall” – Narendra Modi !! Internet Reacts Now

New CCTV Footage Of Srimathi Being Carried From The Spot Surfaced !! WATCH

A new CCTV footage that shows a group of people, presumably the teachers of the Sakthi matriculation school allegedly carrying Srimathi from the spot...

Raiza Wilson conducted a chat session with her followers in her official Instagram account in which she talked about Bigg Boss season three title...