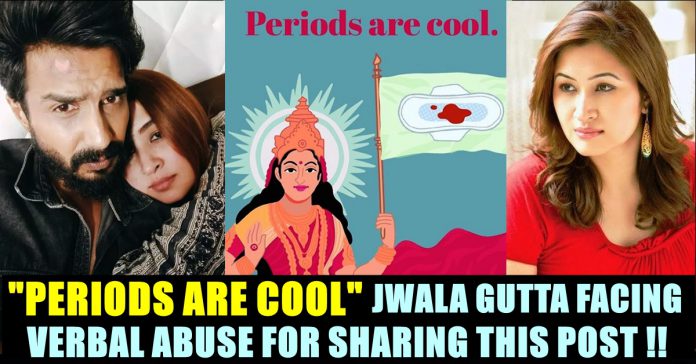 Jwala Gutta, Indian badminton player who represented India in International matches exposed the abusive texts she received for posting a self motivational quote in her own Instagram account. Not only cinema celebrities, people who are associated with sports industry also becoming a subject to online trolling. The professional badminton player who is also a girl friend of Tamil actor Vishnu Vishal expressed her frustration over a random Instagram user who abused her in her Instagram inbox.

As we all know, Social media don’t know the value of the emotions expressed by the celebrities in online medium. Many high profile celebrities are getting trolled and abused by random social media users in daily basis for no appropriate reason.

The number of abusive texts that are being received by females in social media platforms from abusers is increasing in vast number. Knowing that there is no severe laws created yet to put them behind the bars for sending a text in social media, people, mostly men who owns a smartphone are sending abusive texts to their opposite sex without giving a thought about the consequences.

We have seen many female celebrities reporting about cyber bullying from their social media accounts. Now, Jwala Gutta joined the list by exposing a culprit who abused her for sharing a post in Instagram. A design created with an illustration of goddess blessing with a sanitary pad in her flag to convey women that “Periods Are Cool” was shared by Jwala Gutta in her Instagram story.

Check out the design here :

Because a Sanitary Pad is as cool as a Gillette Mach 3 Razor.

Jwala shared the post as her story on 23rd of July. A Instagram user named as Sherpal Sharma who mocked the actress in previous occasions which is evident through the screenshot she shared, abused her this time for sharing the story.

Check out the screenshot shared by Jwala here :

Going by the google translate, the message which was sent by the user in Hindi is roughly translated as “Your mother’s P***y will be cool, she is a b***”. Jwala who lost her nerve on seeing such texts, immediately captured the screenshot and posted it in twitter with a caption saying “These kind of people exist…if they are so violent online they are capable of any kind of violence offline as well…they need to be called out!!“

These kind of people exist…if they are so violent online they are capable of any kind of violence offline as well…they need to be called out!! pic.twitter.com/E3GZJyNheJ

Jwala has a total of 316 match wins in both the disciplines, the most by any Indian and peaked at no. 6 in the world rankings. Gutta has won medals at numerous tournaments on the BWF circuit including a silver at the 2009 Super series Masters Finals and a bronze at the 2011 World Championships. She is currently dating Tamil actor Tamil actor Vishnu Vishal and the couple were posting cozy pictures of themselves before lockdown. Comment your views on this derogatory message sent by the abuser to our nation’s pride !!

Bigg Boss Got Extremely Angry After This Contestant Asked About TRP!!

After Myna asked Nivashini about how the show is performing among audience, Bigg Boss got pretty much upset and asked the television star to...

Based on a statement made by actor Shaam in one of his recent interviews to a private YouTube Channel, users of Tamil twitter community...