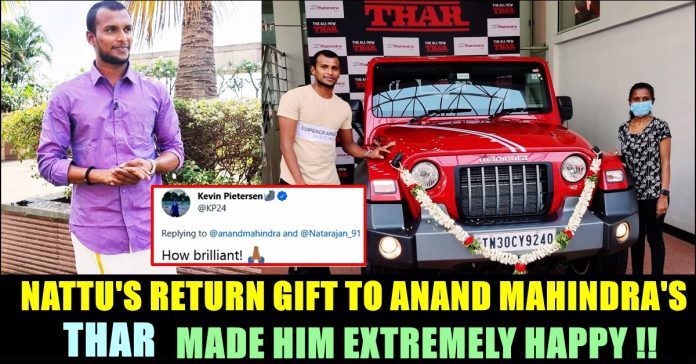 Thangarasu Natarajan of Indian cricket team uploaded a gratitude tweet to Anand Mahindra who gifted him a Mahindra Thar for his performance in the Australia test series. The Tamil nadu based cricketer, in return, gifted the Chairman of Mahindra group the T shirt he wore in the test match that took place in Brisbane. This gesture from the cricketer won the hearts of many people including the one who received it. Anand Mahindra, as a sign of love, uploaded a tweet saying that he will treasure his T-shirt and will wear it with pride.

The world couldn’t stop appreciating team India for what they pulled off in the test series against Australia. After getting all out for just 36 runs in the first match against the home team, the Ajinkya Rahane led team managed to win the series with an inexperienced side and returned home with the trophy. They even defeated the home team at a stadium where they didn’t see a loss in last 31 years. The team achieved the immense feat by lacking star player Virat Kohli along with Ashwin, Jadeja, Shami, KL Rahul, Bhuvaneshwar Kumar, Bumrah, Ishant Sharma and Vihari.

Players garnered royal welcome in their respective towns and are were appreciated by crores of people across the world including cinema celebrities, political personalities and cricket legends. Anand Mahindra, to express his appreciation, announced a surprise gift for the six players who debuted in the Australia test series. He said that he will be gifting each of them a new THAR SUV on his own account.

Natarajan, Shardul Thakur, Navdeep Saini, Mohammad Siraj, Washington Sundar and Shubman Gill are the six debutants who received the gift from the chairman of Mahindra groups.

Theirs are true ‘Rise’ stories; overcoming daunting odds in the pursuit of excellence. They serve as an inspiration in all arenas of life. It gives me great personal pleasure to gift each of these debutants an All New THAR SUV on my own account—at no expense to the company. (2/3) pic.twitter.com/5aiHSbOAl1

On Thursday, Natarajan who performed well in his debut series in the Australian soil, uploaded a series of tweets updating that he drove the vehicle gifted by Anand Mahindra to his home. In return, the cricketer gifted his jersey which he wore on the epic Gabba test by signing on it.

As I drive the beautiful @Mahindra_Thar home today, I feel immense gratitude towards Shri @anandmahindra for recognising my journey & for his appreciation. I trust sir, that given your love for cricket, you will find this signed shirt of mine from the #Gabba Test, meaningful 2/2

Overwhelmed by this gesture of Natarajan, Anand Mahindra wrote “Thank you Nattu. I will treasure the return present & wear it with pride… “ in his tweet.

🙏🏽🙏🏽🙏🏽 Thank you Nattu. I will treasure the return present & wear it with pride… @Natarajan_91 https://t.co/KxciWdQ1ai

Along with former England cricketer Kevin Pietersen, many fans got impressed with this gesture of Natarajan.

It feels immense pleasure to see an Icon Industrialist, who hs alwys stepped in whenever it has been about d Nation's requirements or its Dignity, again giving a prime example of his Love and affection for d Game of Cricket and more importantly for the Nation🇮🇳 in his own way!❣️