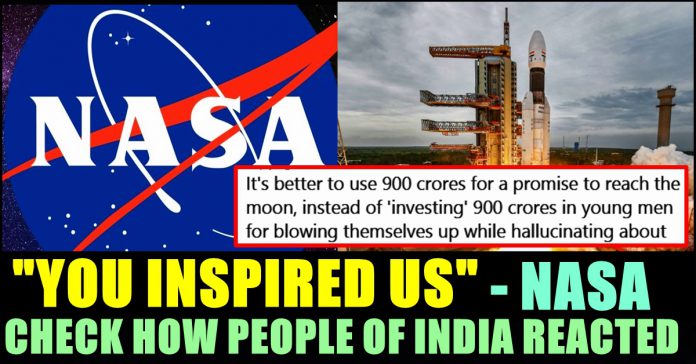 India’s first attempt to land on the Moon may have gone off-script but the ambitious Chandrayaan 2 mission has been far from a flop. With a mission life of at least one year, the Chandrayaan 2 lunar orbiter remains in operation and will continue to study the Moon from afar, carrying out experiments to map the surface and study the Moon’s outer atmosphere.

“Only 5 percent of the mission has been lost – Vikram the lander and Pragyan the rover – while the remaining 95 per cent – that is the Chandrayaan 2 orbiter – is orbiting the moon successfully,” an official of the Indian Space Research Organisation or ISRO told news agency IANS.

Now to our surprise, The National Aeronautics and Space Administration (Nasa) took to Twitter on Saturday evening to commend the Indian Space Research Organisation’s attempt to land its Chandrayaan-2 mission on the South Pole of the Moon.

“Space is hard. We commend Isro’s attempt to land their Chandrayaan-2 mission on the Moon’s South Pole,” Nasa tweeted. “You have inspired us with your journey and look forward to future opportunities to explore our solar system together,” the US space agency added.

Space is hard. We commend @ISRO’s attempt to land their #Chandrayaan2 mission on the Moon’s South Pole. You have inspired us with your journey and look forward to future opportunities to explore our solar system together. https://t.co/pKzzo9FDLL

People of India who witnessed this tweet felt proud and expressed their gratitude in the comment section. Meanwhile many users mocked Pakistan sarcastically for their regressive tweets against ISRO. Check out some of the reactions here :

It's better to use 900 crores for a promise to reach the moon, instead of 'investing' 900 crores in young men for blowing themselves up while hallucinating about meeting 72 hoors in Jannat. Priorities.#Chandrayan2

Do educate the 2nd grader who's been having orgasmic glee today. Pakistan's lout of a technology minister. Halwaai fawad hussain. Science and techno minister.🙄

I'm from pakistan and i acknowledge the efforts of ISRO
Atleast you guys tried i appreciate your efforts .Peace ❤

Padosis When They See NASA Appreciating ISRO Will Be Like 😂😂❣️ pic.twitter.com/4fdHtJdTdp

“The Vikram lander followed the planned descent trajectory from its orbit of 35 km to just below 2 km above the surface. All the systems and sensors of the lander functioned excellently until this point and proved many new technologies such as variable thrust propulsion technology used in the Lander,” Isro said in an update.

Previous articleFor Shouting At ISRO Official At Press Meet, Reporter Got Thrashed By Public !! MUST CHECK !!
Next articleRajini Fan Posted A Disrespectful Tweet Against Director/Actor Parthiban !! You Must See The Way Parthiban Replied !!

South Indian actress Rashmika Mandanna, in her recent press meet with the reporters, opened on getting banned by Kannada film industry due to the...

Followed by several other cinema celebrities, actor and cinematographer Natti aka Nataraj who rose to fame among Tamil audience through his appearance in "Sathuranga...

Kasthuri is an Indian film actress, model, TV show anchor and social activist. She began her acting career in 1991 in Kollywood and has been...