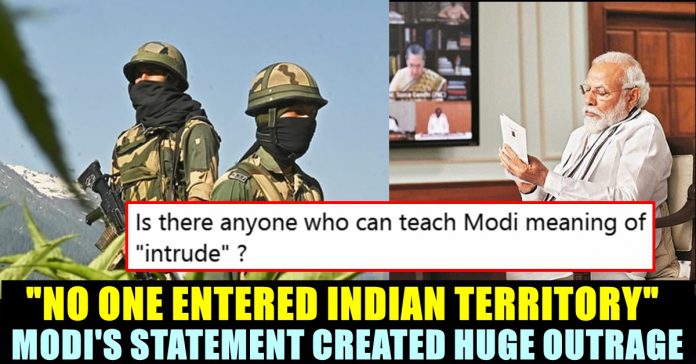 “No one has intruded on India’s borders nor has any post comes under anyone’s custody”, said Prime Minister Narendra Modi on Friday at an all party meeting called to discuss the clash with Chinese forces in Ladakh in which 20 Indian soldiers lost their lives.

The Prime minister further added that the entire country is hurt and angry at the steps taken by China at the Line of actual control or LAC. “Twenty of our braveheart were martyred in Ladakh but not before they taught a lesson to those who raised an eye at Bharat Mata” he said. “I want to assure you that our forces will spare no effort to protect our nation. Today, we have the capability that no one can look at even an inch of our territory” PM Modi said.

“While we have given a free hand to our armed forces, diplomatically too we have made our stand clear to China. India wants peace and friendship but protecting its sovereignty is Supreme. Because of new infrastructure, especially along the LAC, our patrolling capability has gone up. Because of that alertness has gone up and events happening on the LAC are being reported” he said. He added that the sacrifices of the Indian soldiers would not go vain and India, while peace loving, is capable of giving a fitting reply if provoked.

However, majority people in social media questioned the statements provided by the PM. The way PM said that “No outsiders was inside Indian territory in Ladakh” might provoke China to say that Indian soldiers crossed their territory and they were killed in self defence, said one of a twitter users. As he predicted a Chinese journalist reported that the incident took place in Chinese territory.

Check out some of the reactions in social media below :

Now Chinese are using statement of PM Modi to substantiate their claim on our territory ! Shameful !#ModiSurrendersToChina https://t.co/Vv0nCkUbL4

I think it's time to demand Narendra Modi's resignation.

If the land was Chinese, why the fuck our soldiers were deployed there? And without arms. Did Delhi send them up there to get slaughtered? And finally the Chinese government was right about Indian soldiers overstepping on Chinese territory? It's our fault??? #ModiIsALiar

I am ashamed of my Prime Minister

👉If China didn't enter India, then where did they pick our 10 armymen from?

👉Every inch of land where Chinese are right now henceforth belong to China?

👉20 jawans died on India's or no man's or China's land? Are we abandoning our claim to no man's land?

Is there anyone who can teach Modi meaning of "intrude" ?

Who killed our 20 brave soldiers?

Why did military dialogues took place then?

Why are the armies of India & China disengaging at LAC? #ModiSurrendersToChina

Update : A clarification has been released by the Government regarding the statement of PM Modi :

#BREAKING: Fresh statement by Indian Prime Minister’s Office on PM @narendramodi’s comments on India-China faceoff. ‘Prime Minister was clear that India would respond firmly to any attempts to transgress the Line of Actual Control (LAC)’, it says. pic.twitter.com/6owsqd7oaL